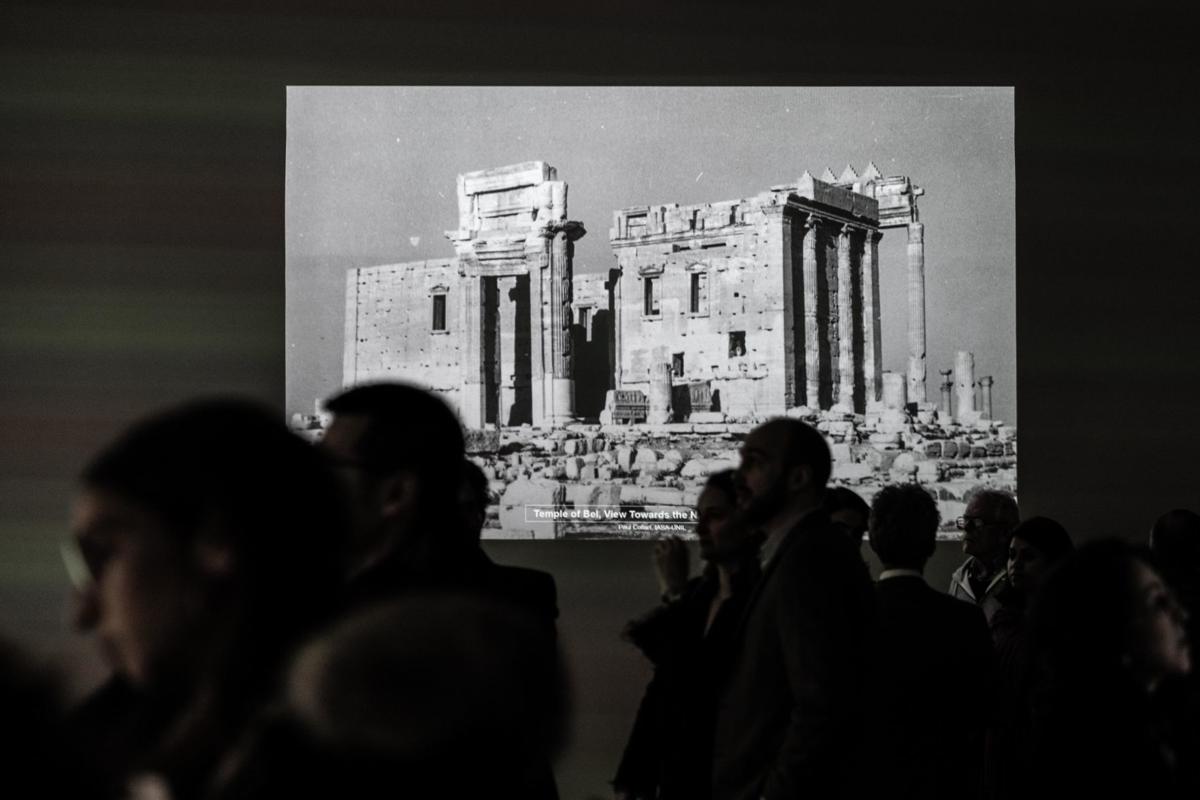 In ‘Age Old Cities,’ visitors can see large-scale projections and digital reconstructions of iconic monuments and ancient structures rising from ruins to their former glory. 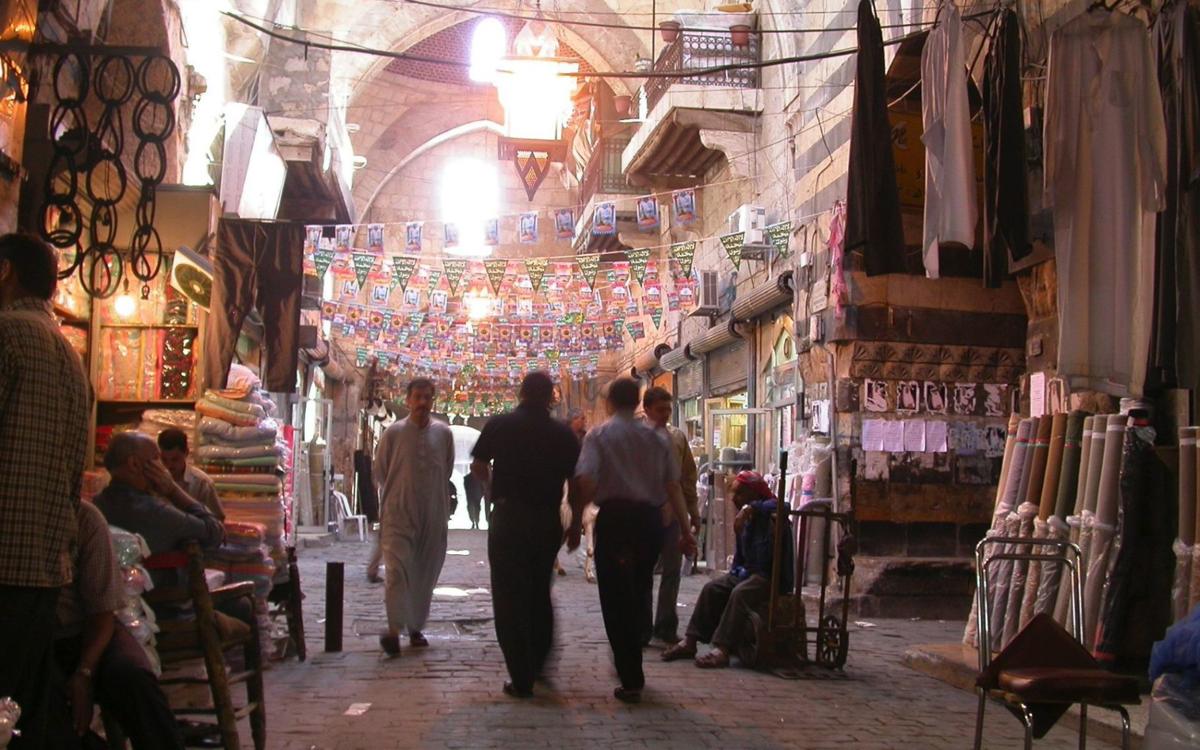 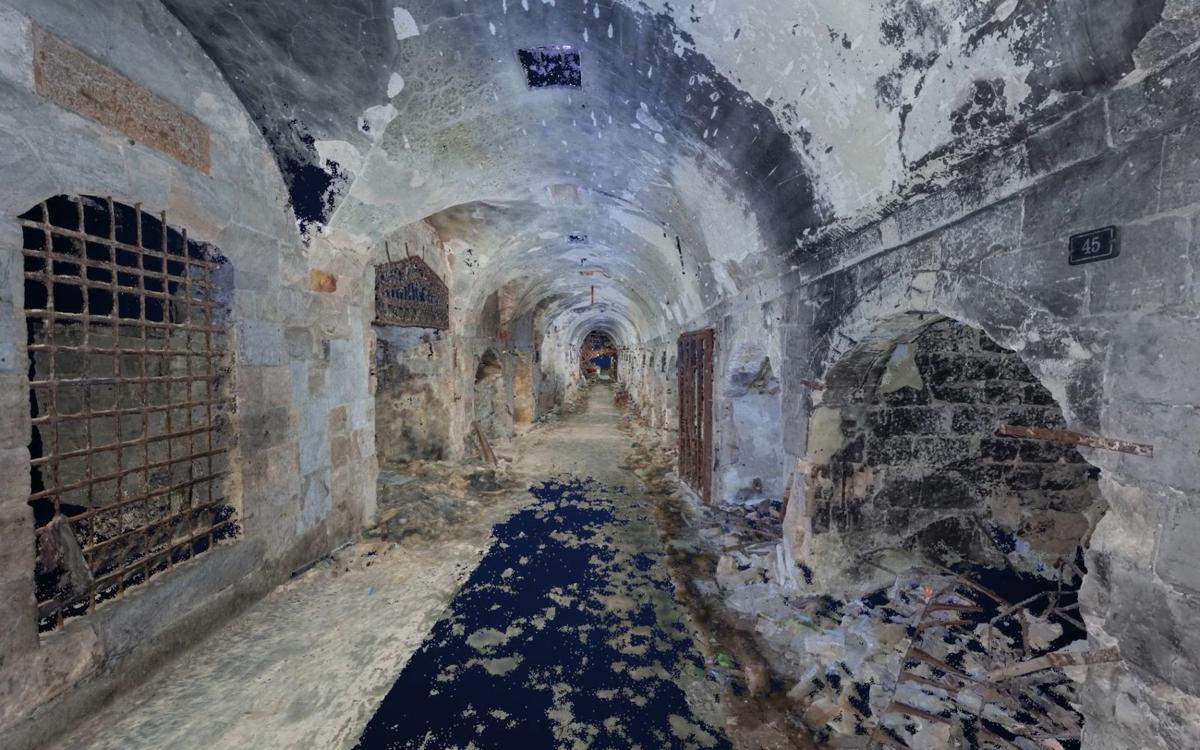 Videos explore unique parts of the cities such as the souks (markets) of Aleppo.

A life-size digital projection of the colorful Souk al-Zarb in Aleppo, Syria, vibrant with activity of daily life, turns in seconds before our eyes into endless pathways through ashen ruins. So begins “Age Old Cities: A Virtual Journey from Palmyra to Mosul” at the Smithsonian’s National Museum of Asian Art, an immersive experience for viewing the recent destruction by ISIS of ancient ruins.

An accompanying documentary, “Greetings from Aleppo,” reveals the effects of devastation through the eyes of the residents, who are trying to maintain normalcy, constantly sweeping up rubble amid the sound of frequent gunfire.

While the people of Aleppo, Palmyra and Mosul are the first and foremost direct victims, this exhibit exposes our shared cultural losses.

Giant-screen projections and 11-foot-high digital reconstructions of icon monuments and ancient sculptures reveal not only their current condition but future plans for their restoration and repair. Recordings by drones “digested” and combined with archival material provide these unique overviews, while archaeological building surveys in the 1950s of the devastated ruins provided data for the 3D projections of possible future reconstruction.

Film footage of these sites in the early 20th century, which would perhaps be nostalgic in another exhibit, provides a thought-provoking contrast to these virtual digital reconstructions.

Palmyra, The City of Palms, an ancient trading center in the Roman empire over 2,000 years ago, the crossroads of the spice trade, was blown up by ISIS from 2015 to 2017, thus leaving ancient Roman ruins, notably the temple and theater in further ruins. Yet to be resolved is should they be restored to their state before ISIS or to their original state before ruined by time and neglect?

The Tomb of the Three Brothers, dating from the second century CE, is a collective of underground tombs that were decorated with wall paintings and included carved stone sarcophagi. A video reveals how this site escaped total destruction when used as a base of operation by ISIS soldiers for barracks with canteen and an office. While ISIS destroyed the artworks as icons, covering them with white paint and blankets to not see the figures, they left behind trash with “iconic” tin cans.

Mosul, Iraq, is across the Tigris River from the ancient site of Nineveh. The Bible story, shared by three religious traditions, Judaism, Christianity and Muslim, is that Nabi Yunus (the prophet Jonah) was sent to warn Nineveh of destruction. The Mausoleum of Nabi Yunus in an ancient church, which became a medieval mosque, is now laid in waste by ISIS. Unexpectedly, under the rubble was found fragments of the palace of seventh-century BCE Assyrian king Esahaddon which are now being studied by archaeologists.

While modern technology is the media for this exhibit, there is an exquisite limestone funerary relief sculpture of a woman from Palmyra, Syria, dating from 231 AD in the adjacent Freer Gallery. Indicating both Roman and Aramaic artistic influences, this original work along with others in the museum brings the reality of ruins up close to view, reinforcing the cultural connections of East and West and the importance of these sites.Sheila Wickouski, a former Fredericksburg resident, is a freelance reviewer for The Free Lance–Star.

"Age Old Cities: A Virtual Journey from Palmyra to Mosul" includes a virtual reality experience to five of these sites, available on the first Saturday of each month from noon to 4 p.m. in Sackler B2; in July, the event will be held on July 11. Recommended for visitors ages 12 and up. Additional talks are scheduled and can be found at the Sacker’s web page asia.si.edu/events-overview/talks.

View works by Graciela Iturbide, one of the most influential contemporary photographers of Latin America, at the National Museum of the Women in the Arts, which will reopen its doors Aug. 1.

In ‘Age Old Cities,’ visitors can see large-scale projections and digital reconstructions of iconic monuments and ancient structures rising from ruins to their former glory.

Videos explore unique parts of the cities such as the souks (markets) of Aleppo.