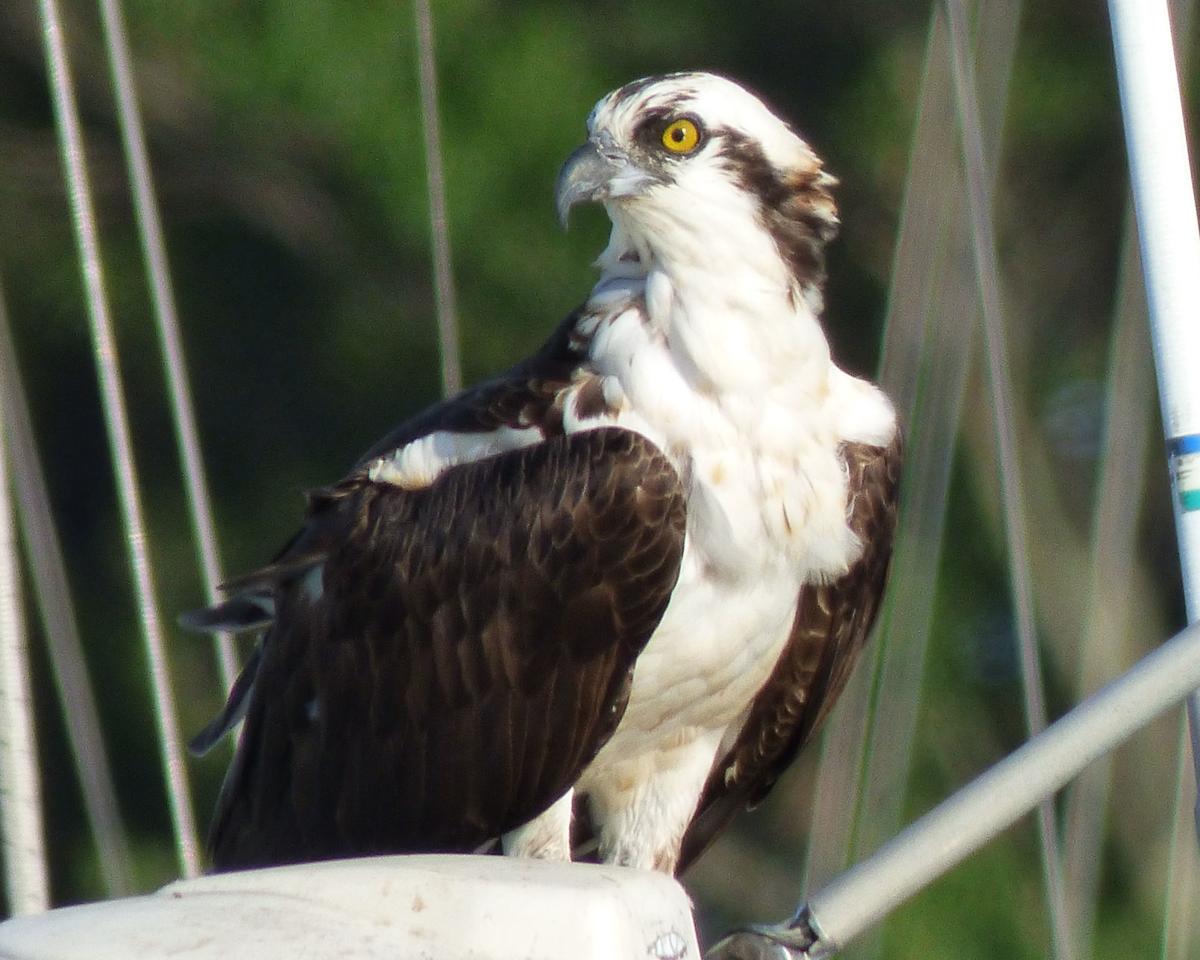 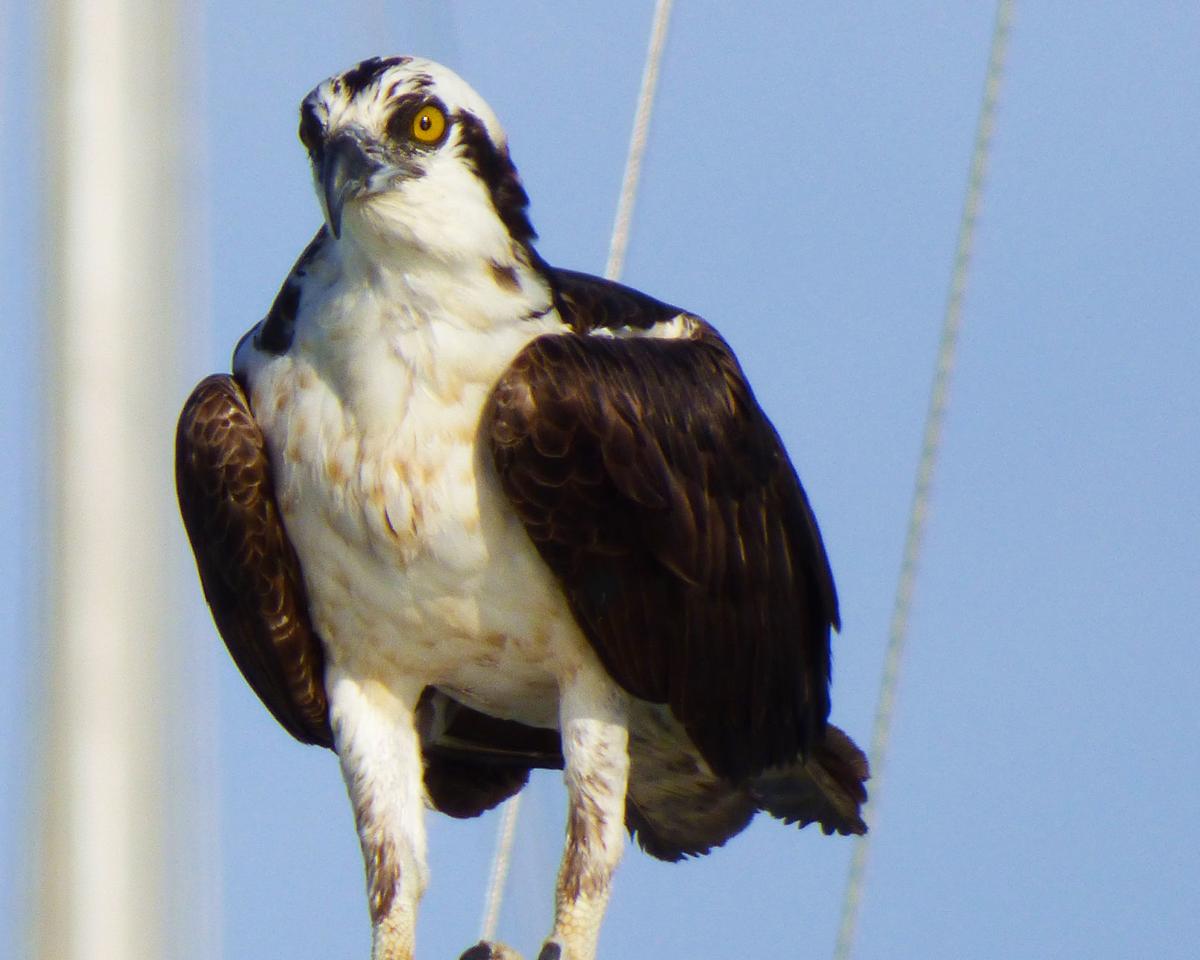 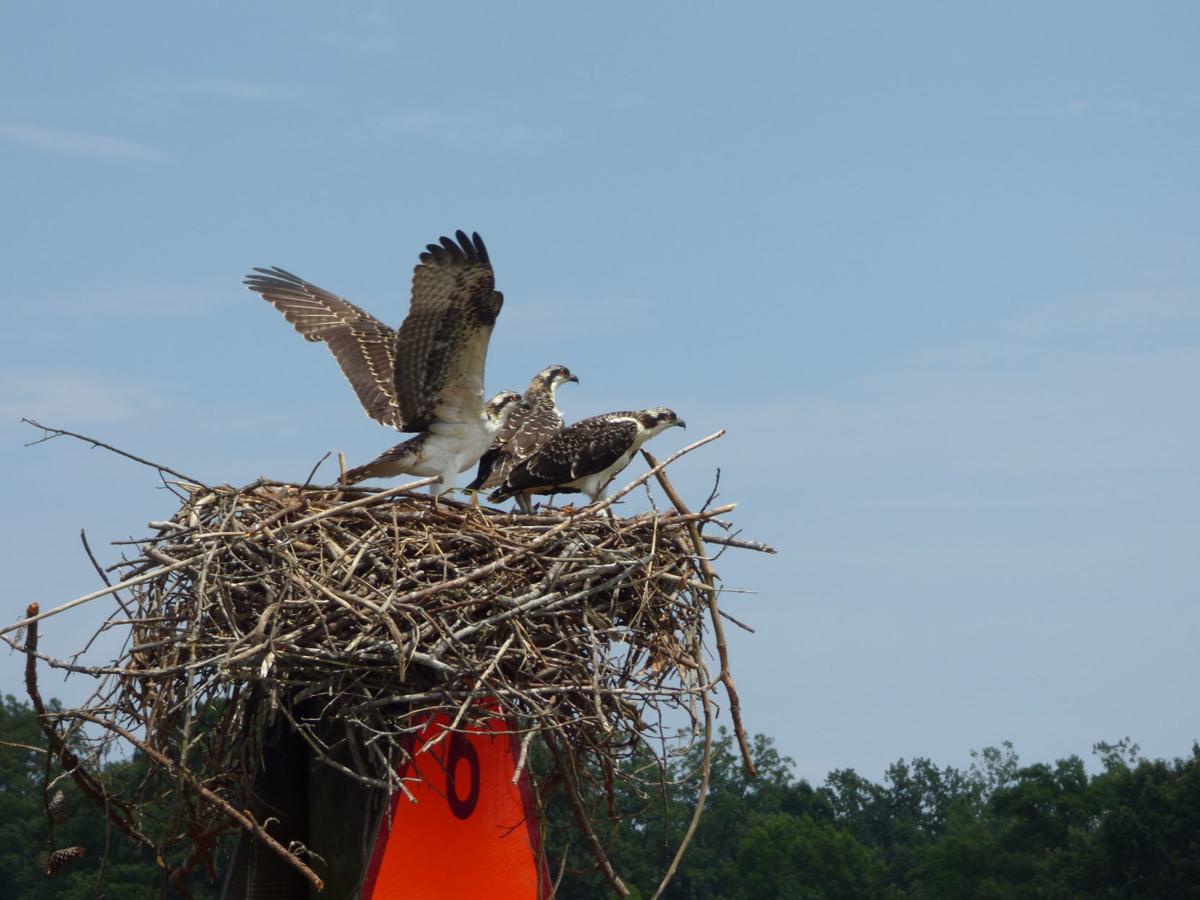 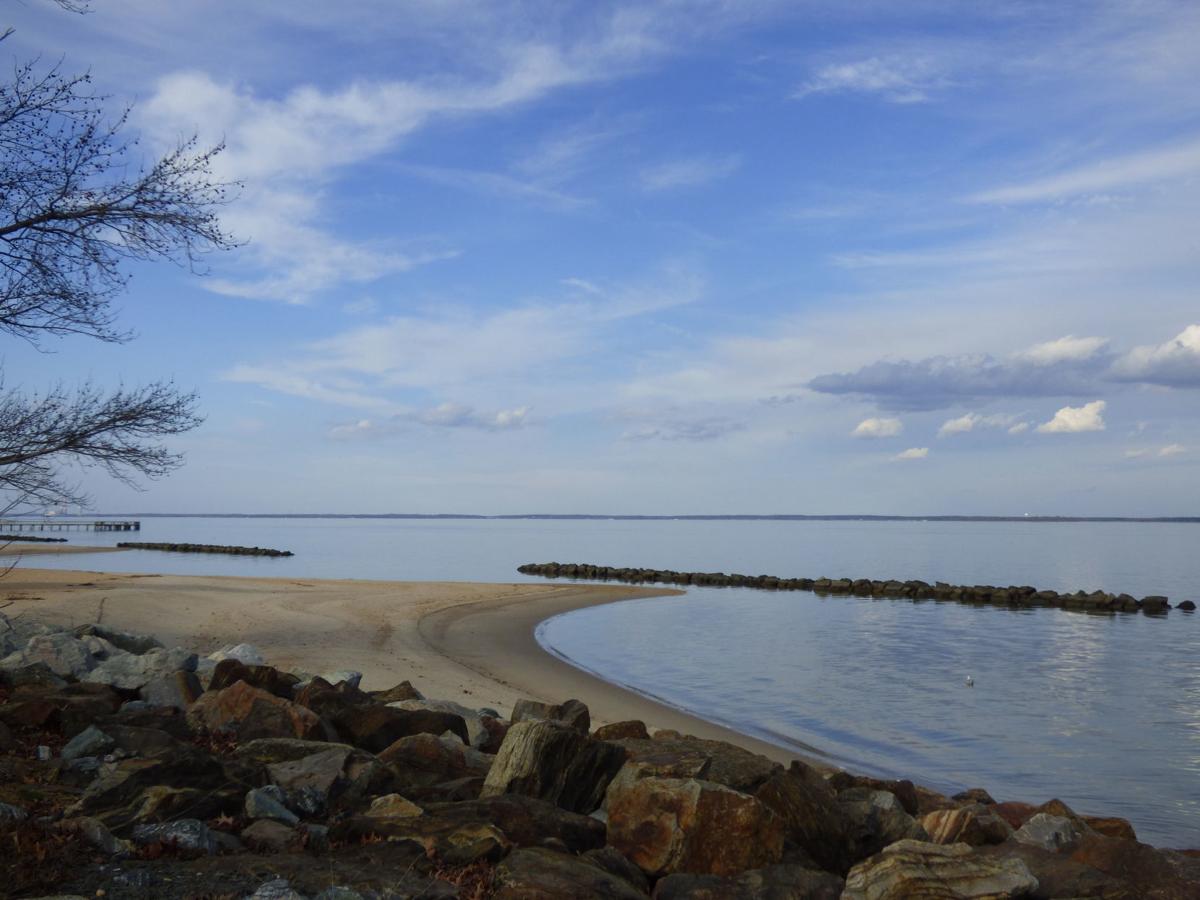 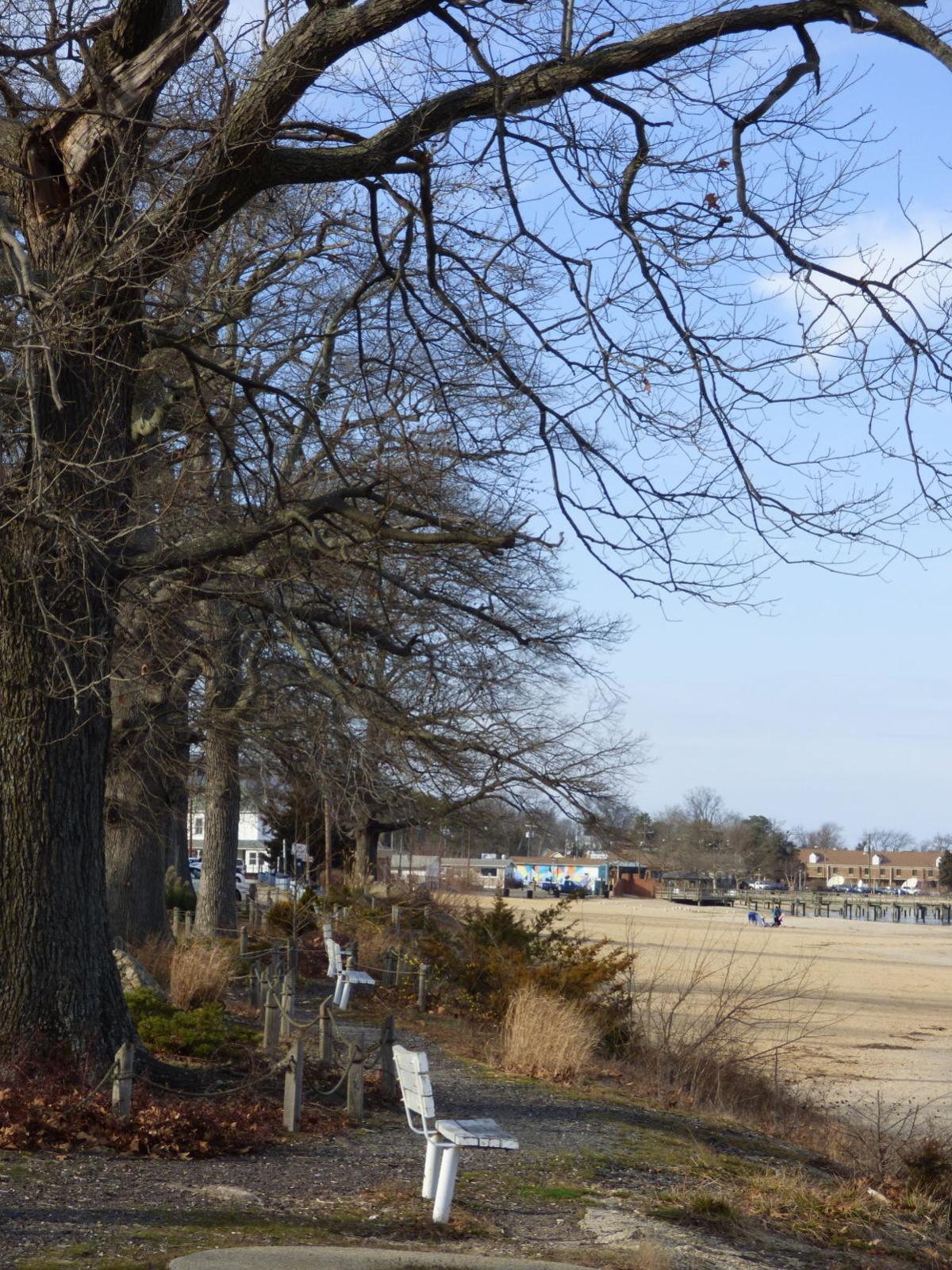 Dolley and James live just off Madison Street in Colonial Beach. Like many of the seasonal visitors to the town, they’re there from March through September: typical “snowbirds” who spend the winters in Florida and fly back north in warmer weather.

They’re neighbors that Joyce Reimherr enjoys seeing each year—because Dolley and James are a pair of ospreys whose nest draws birders to the area.

Reimherr, president of Downtown Colonial Beach, the town’s Main Street America organization, named the pair after the nearby street’s namesakes, and said seeing them return in the spring is “entertaining and uplifting.”

She organizes the town’s annual Osprey Festival along with local birders, Audubon Society members and master naturalists. DCB created the event to celebrate the critical mass of the birds in town and the opportunities for naturalists in the Chesapeake Bay Watershed, the largest osprey nesting grounds in the world. It began in 2019 with a weekend of bird walks, presentations and art exhibits.

The Osprey Festival would have taken place on May 2 this year, but the ongoing COVID-19 pandemic forced the festival online. However, the virtual nature of the event allows people to stay involved with osprey watching for the entire nesting season, and content is rolling out continually on the festival’s website and Facebook page.

Reimherr said they will likely keep the event going through September, and that the Colonial Beach Virtual Osprey Festival offers much of what would have been offered at the live festival: photos, stories, videos and presentations on the ospreys and other birdlife characteristic to the area. New material will be coming in week by week on the event’s website and Facebook page.

The birds come back to the same locations year after year, according to the Audubon Society, building great nests close to the water. The nest sites are usually on top of large tree or poles open to the sky. They are creatures of habit and may use same nest for years, adding twigs and assorted debris each nesting season, so the nest becomes its own towering feat.

The festival celebrates this return showcasing the under-recognized assets of the community. It’s not just a summer beach destination; it has opportunities for naturalist activities year-round, Reimherr said.

Upcoming virtual offerings include a children’s play written by the local performing arts society and videos of bird-related crafts.

Already available on the website are links to live osprey cameras and information on the species, including a PowerPoint presentation on birds in the Miocene era by Stratford Hall, which has notable fossils in its cliffs along the Potomac River.

But bird lovers can continue to get involved as “osprey watchers.” Reimherr said they are seeking photos of local nests, even outside of Colonial Beach. By posting them, along with a name for the nesting pair, on the Facebook page, she can update the festival’s blog with osprey sightings. A “king and queen” osprey pair will be chosen by the end of the virtual festival. Observant osprey reporters have a chance to win a prize.

She said all of this is an effort to create “renewed appreciation for nature and for birds. They are a precious and fascinating component of the local ecosystem.”

Ospreys were endangered by the effects of pesticides. But since DDT and related pesticides were banned in 1972, ospreys have begun to make a comeback in North America. They’re a distinctive fish-hawk, a member of the raptor family, and are famous for flying over water and plunging feet-first to catch fish.

But the resurgence of ospreys has a funny connection with Colonial Beach. As their numbers rose, so did the visibility of the town, which has a storied history as a steamboat-era resort, a mid-century gambling draw and more recently as a place for artists and nature lovers.

“There’s a sense of community,” Reimherr said. “And Downtown Colonial Beach exists to preserve the eclectic, sometimes eccentric, up and down and all-around history of Colonial Beach.”

Donations, sponsorships and advertising revenue raised through the virtual festival will be applied to revitalizing the historic downtown through landscaping and tree planting, making the osprey habitat more sustainable.

She said birders can still visit the town while socially distancing by visiting on a weekday rather than a weekend, when the beach can become crowded. Restaurants are open for takeout, breweries and bars are offering local beer and the scenery and birds are well-observed by a walk or bike ride about Colonial Beach’s point with the Potomac on the east and Monroe Bay on the west.

“It’s a place for all kinds of people,” she said—even birders.

Beachbound or homebound, here are 10 great books to read during these last weeks of summer.