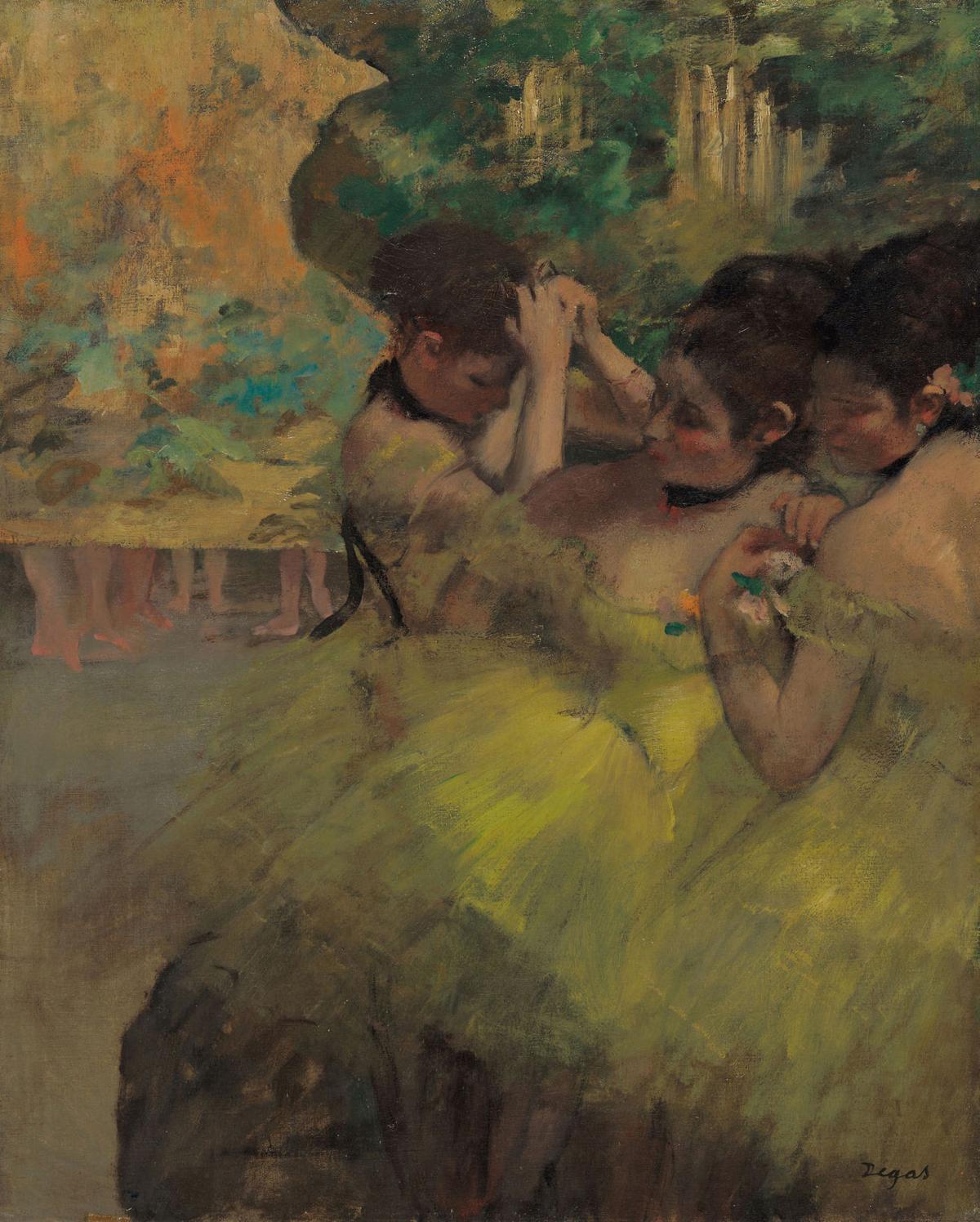 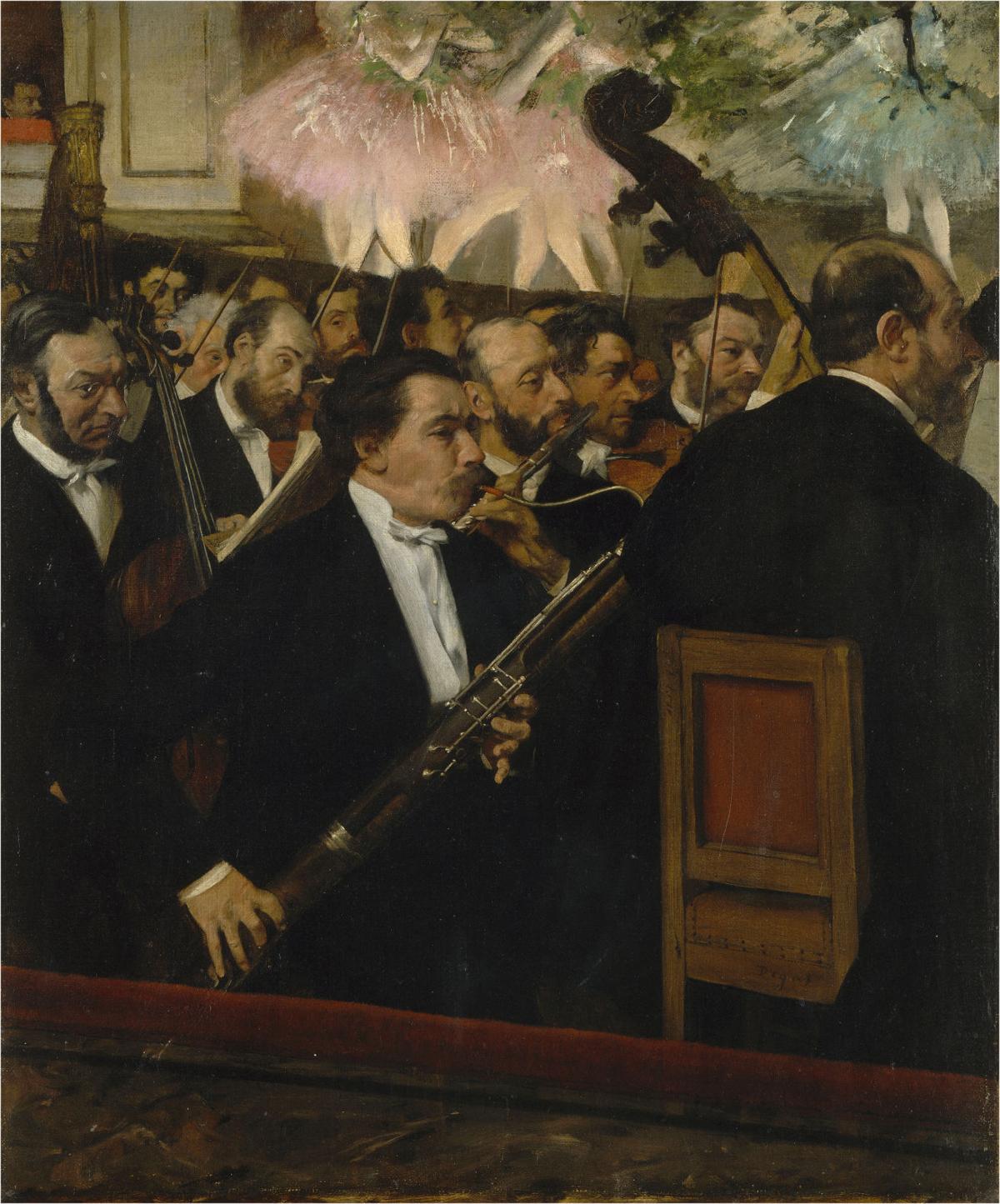 Bassoonist Désiré Dihau is featured in ‘The Orchestra of the Opéra,’ oil on canvas. 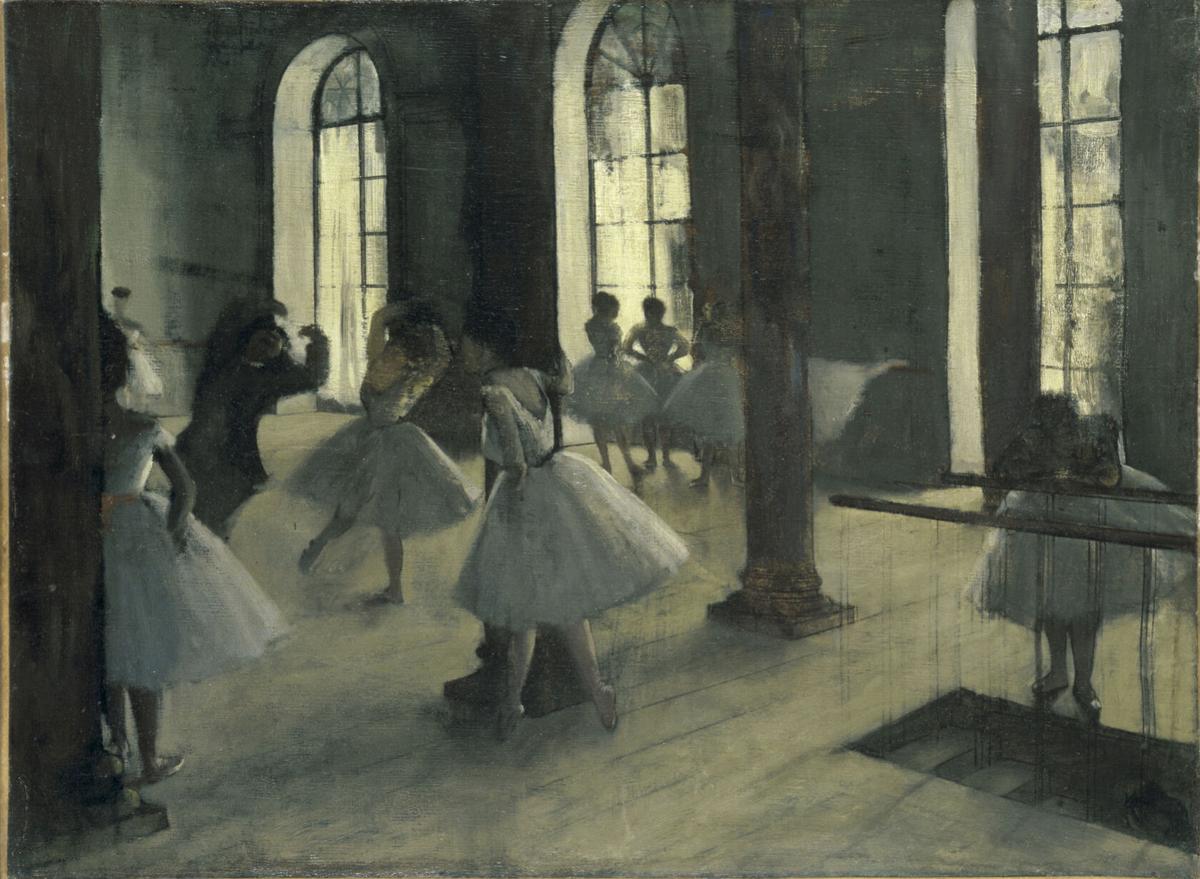 ‘The Dance Lesson’ is among 100 works in the exhibit ‘Degas at the Opéra,’ celebrating the 350th anniversary of the Paris Opéra’s founding, at the National Gallery of Art. 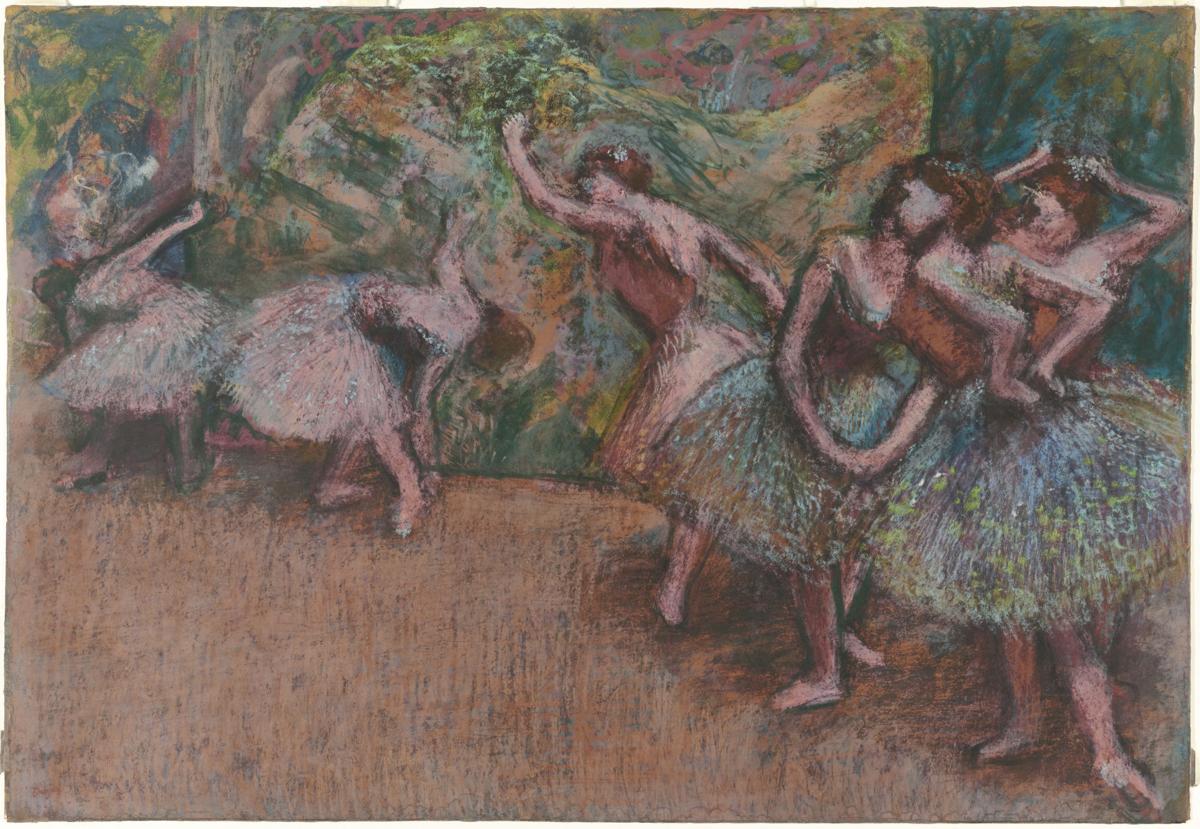 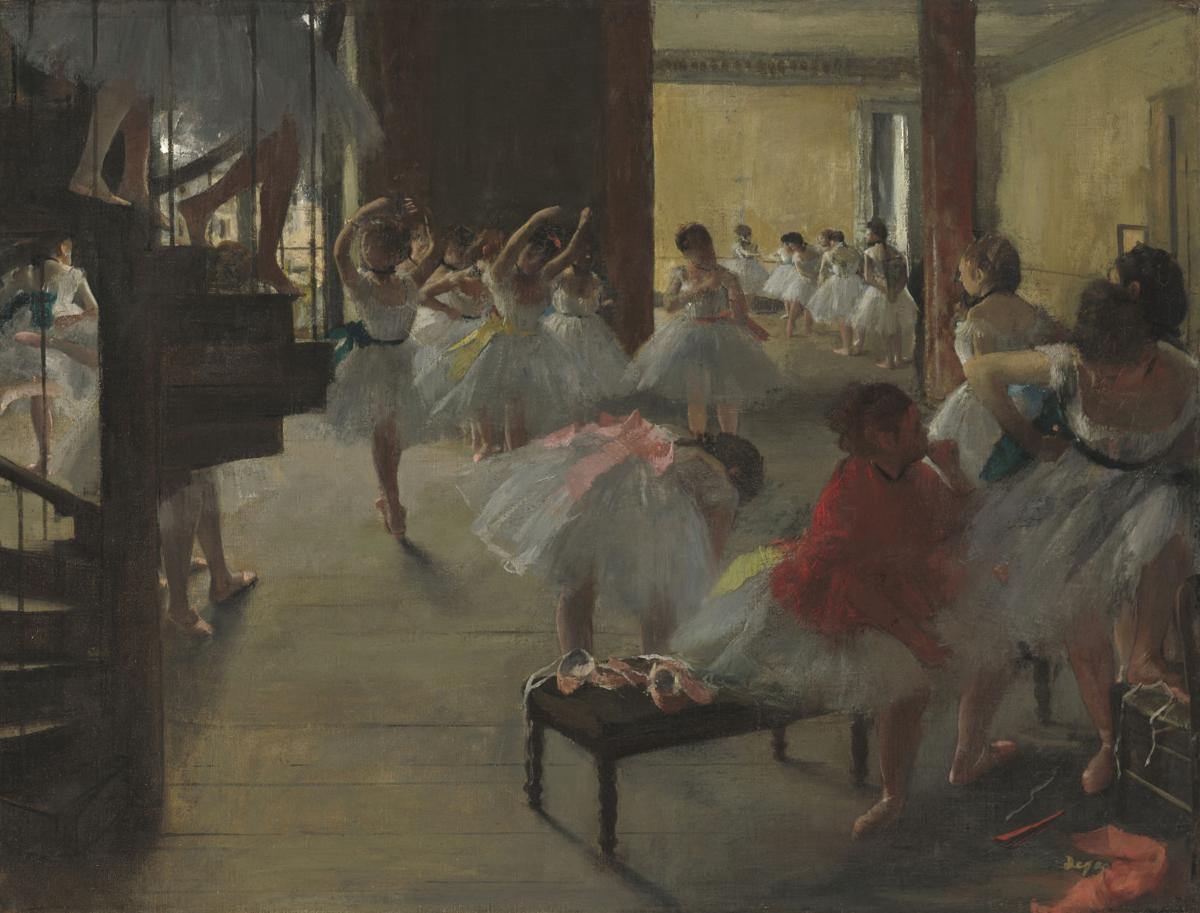 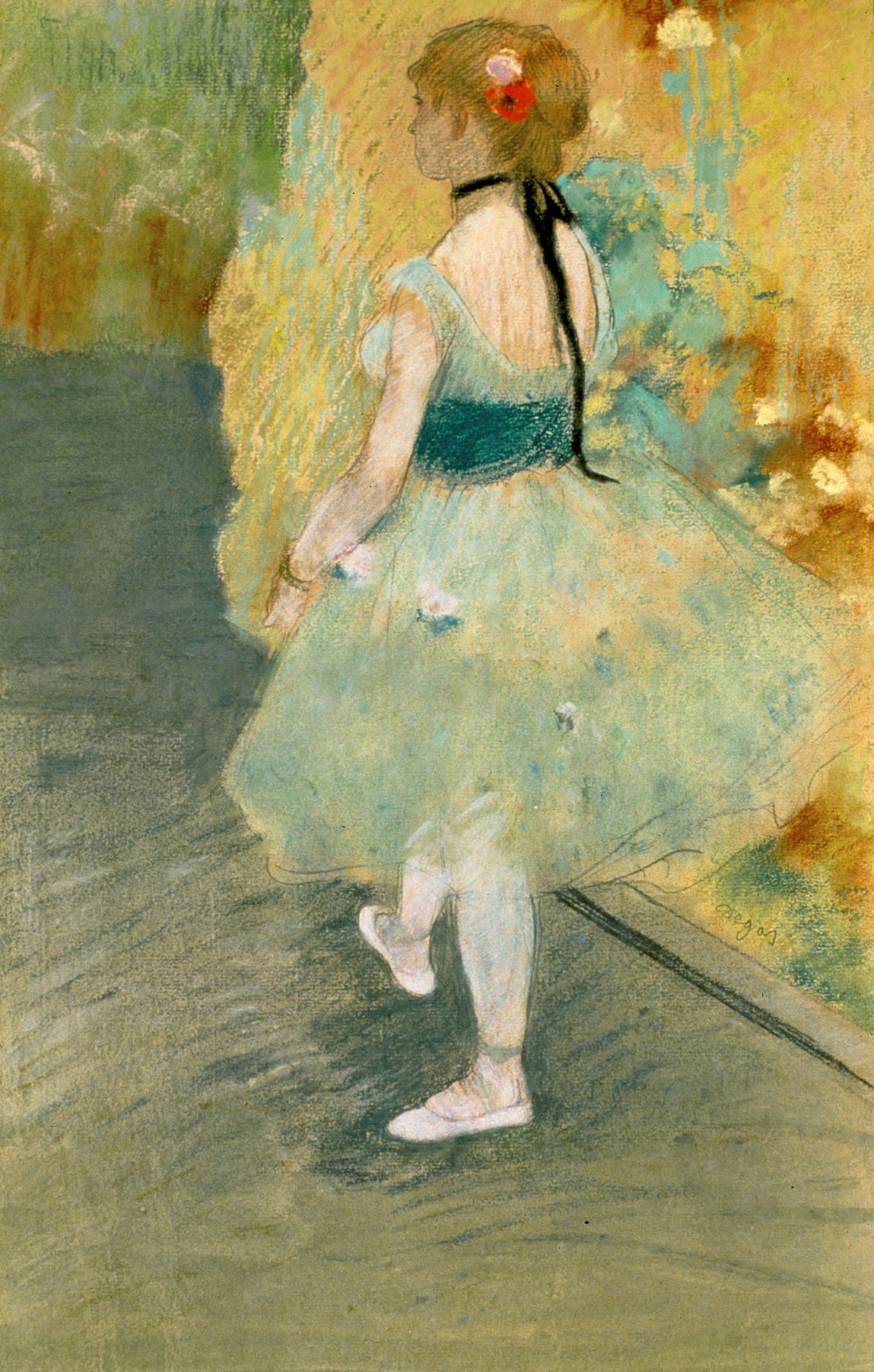 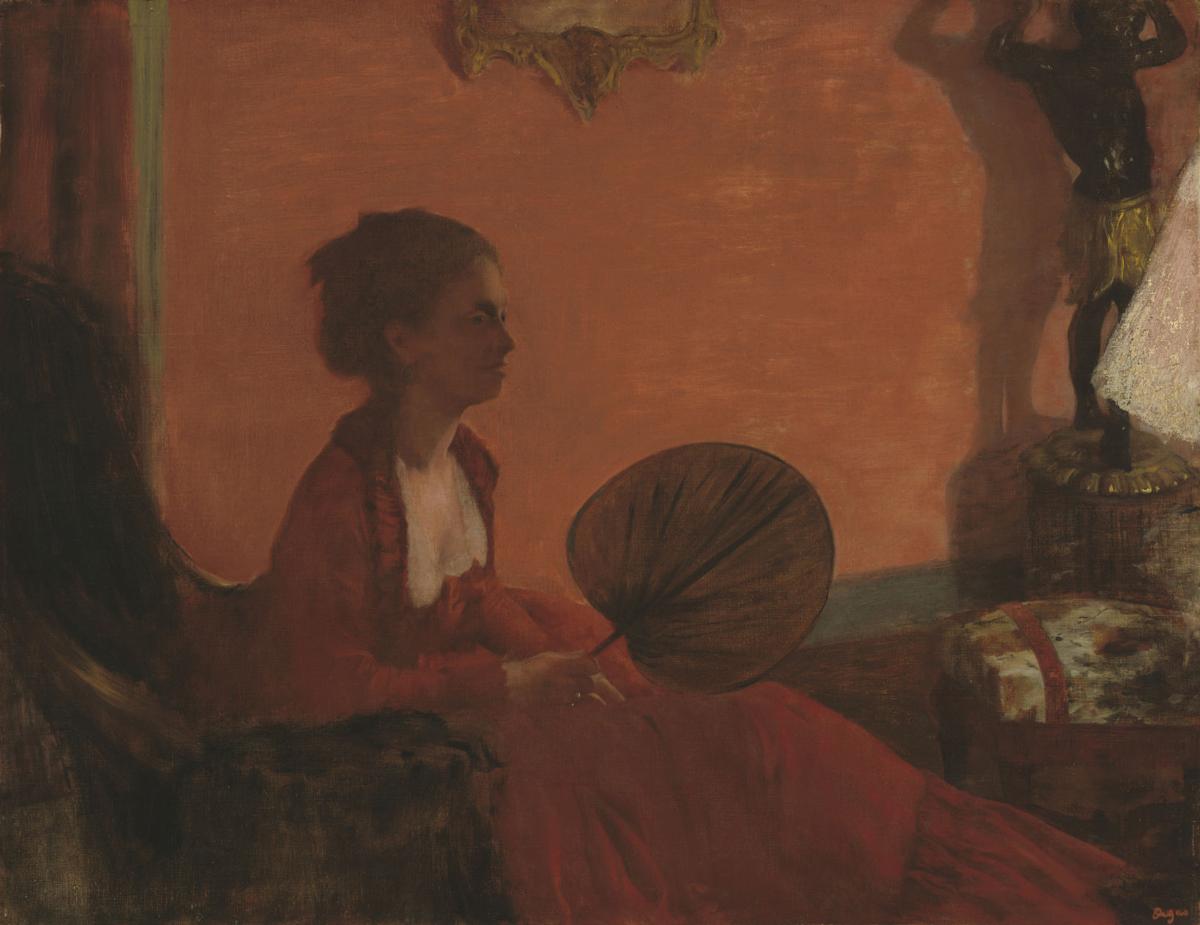 ‘Madame Camus’ is part of the Chester Dale Collection. 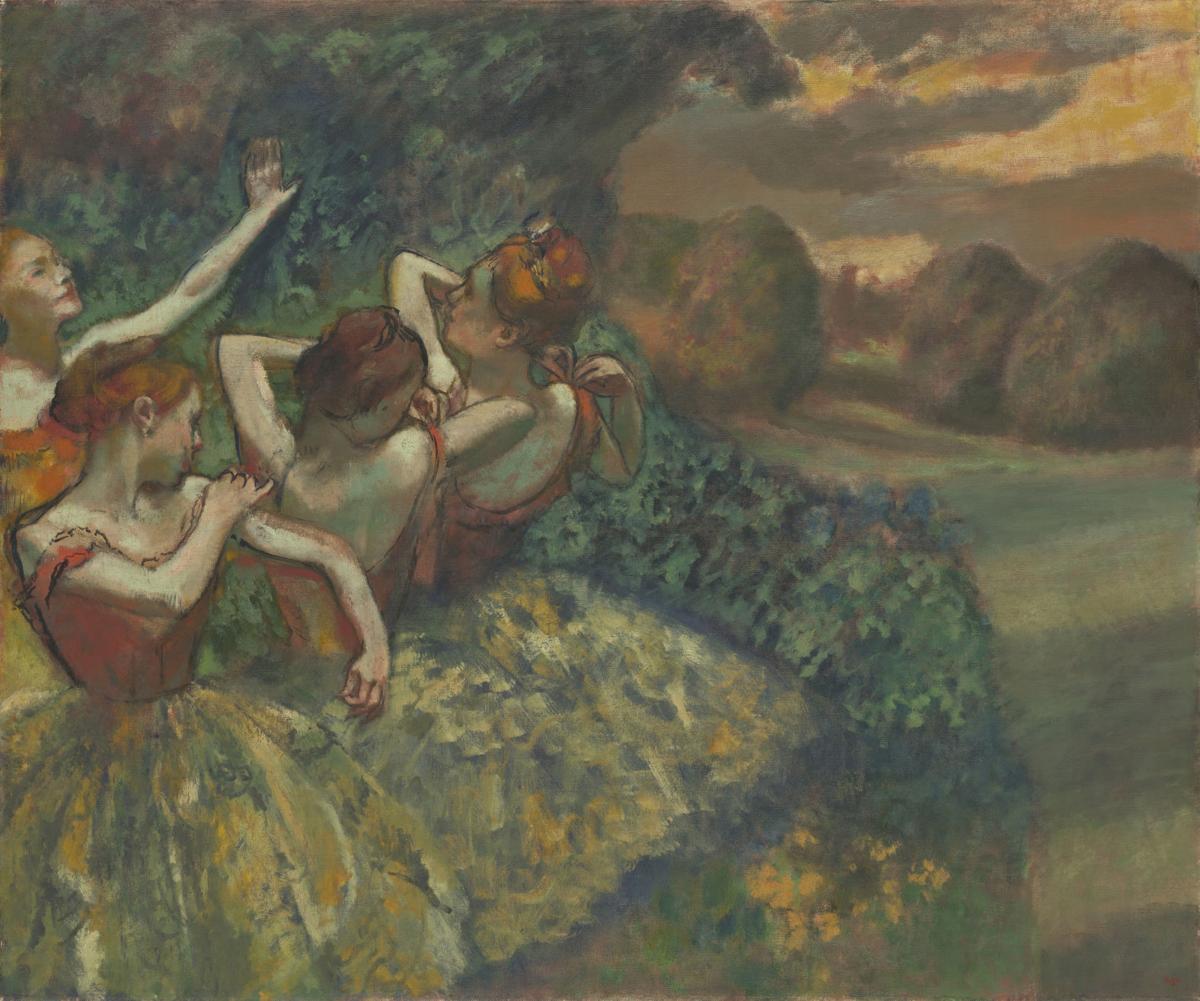 The exhibit, on display through Oct. 12, showcases the artist’s love of the Paris Opéra. Above: ‘Four Dancers.’ 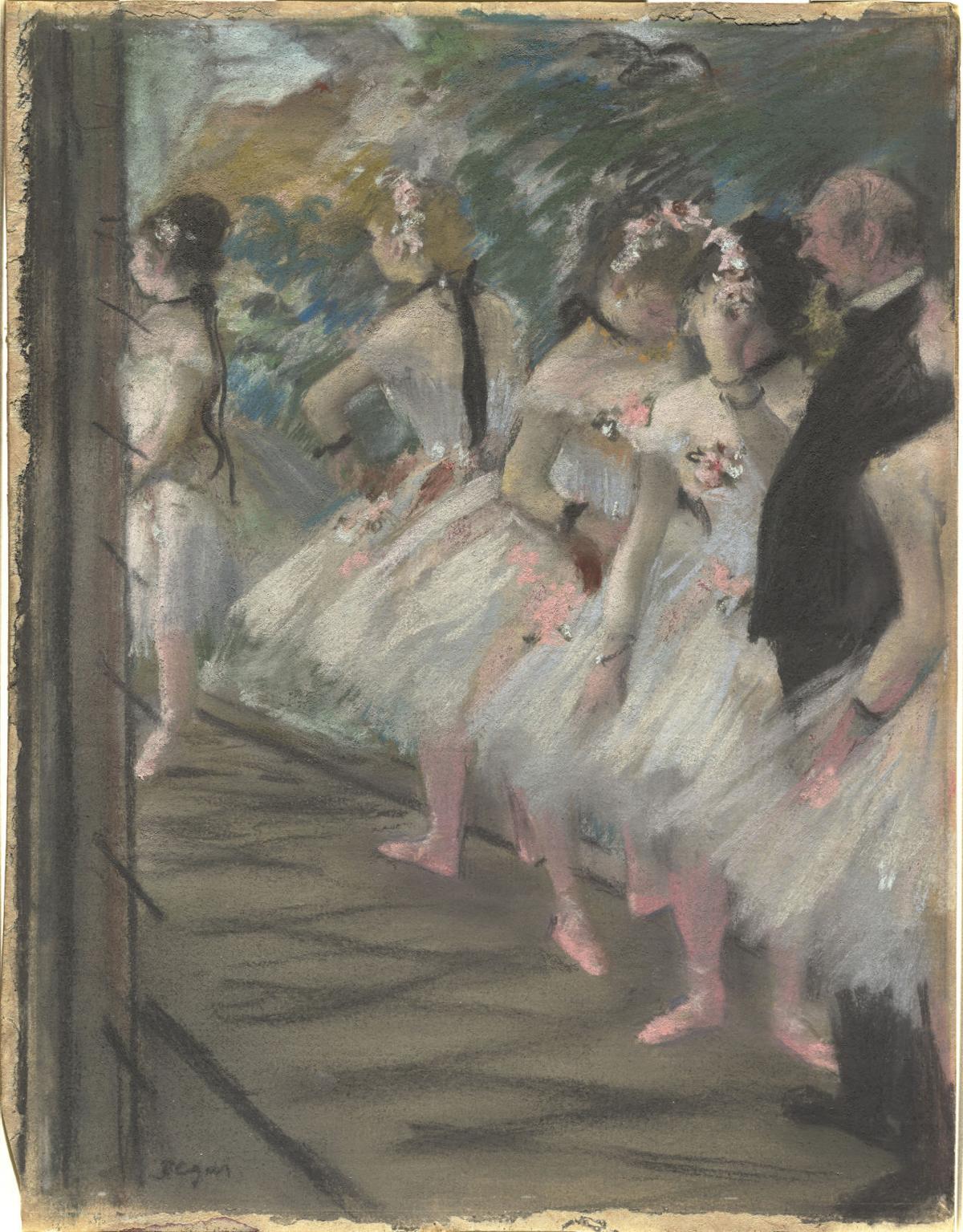 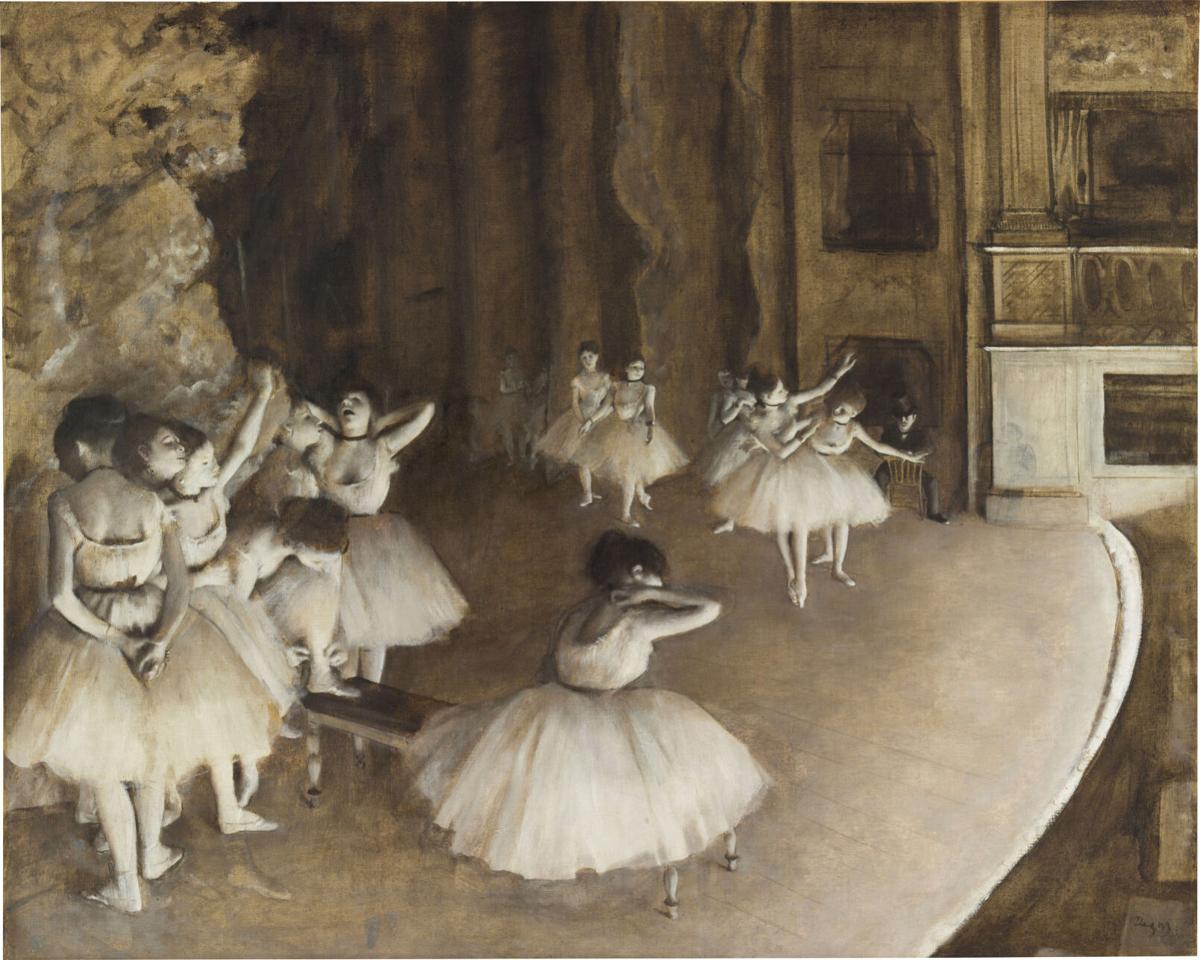 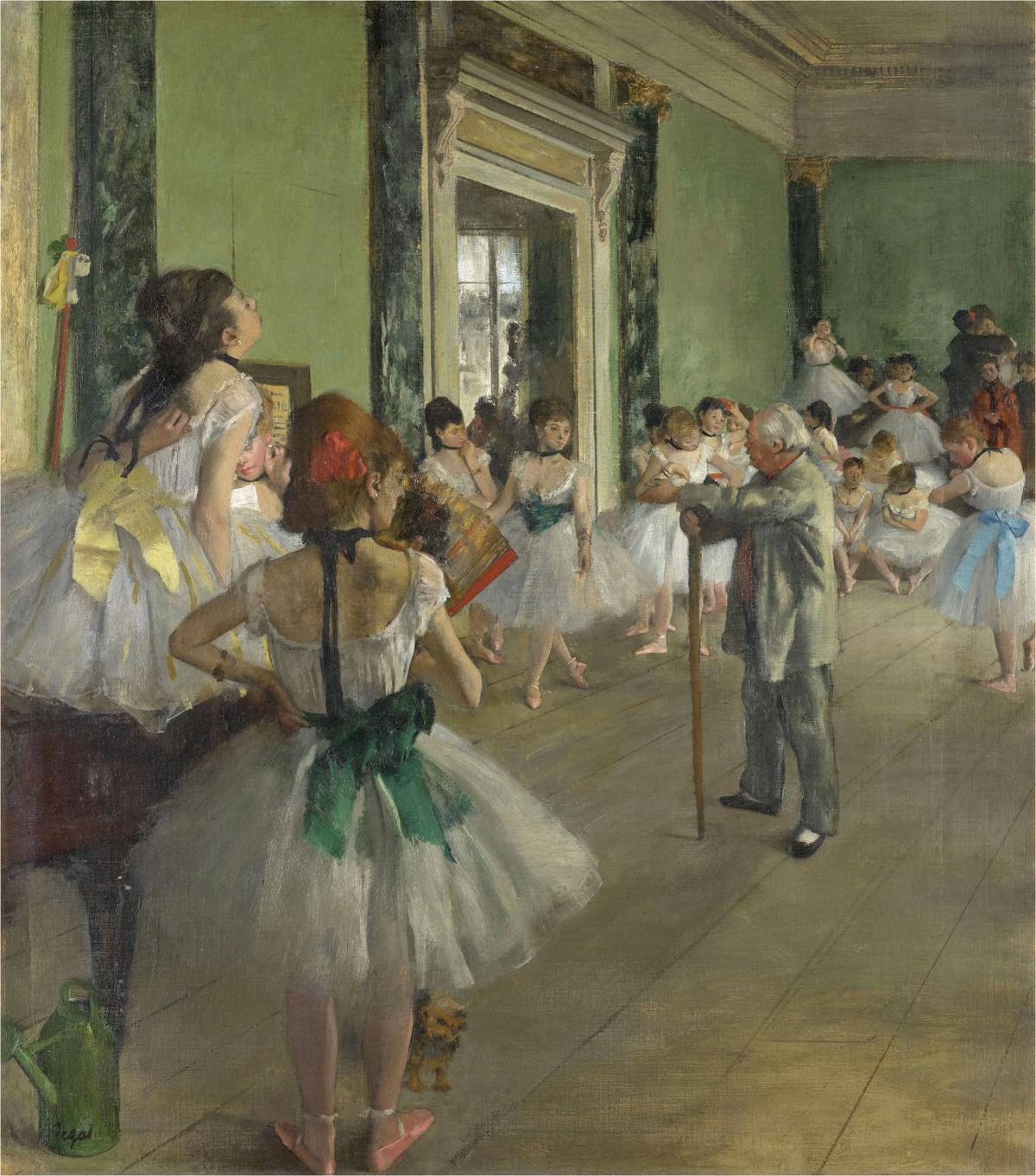 Ballet master Jules Perrot is depicted behind the scenes in the painting ‘The Dance Class.’ 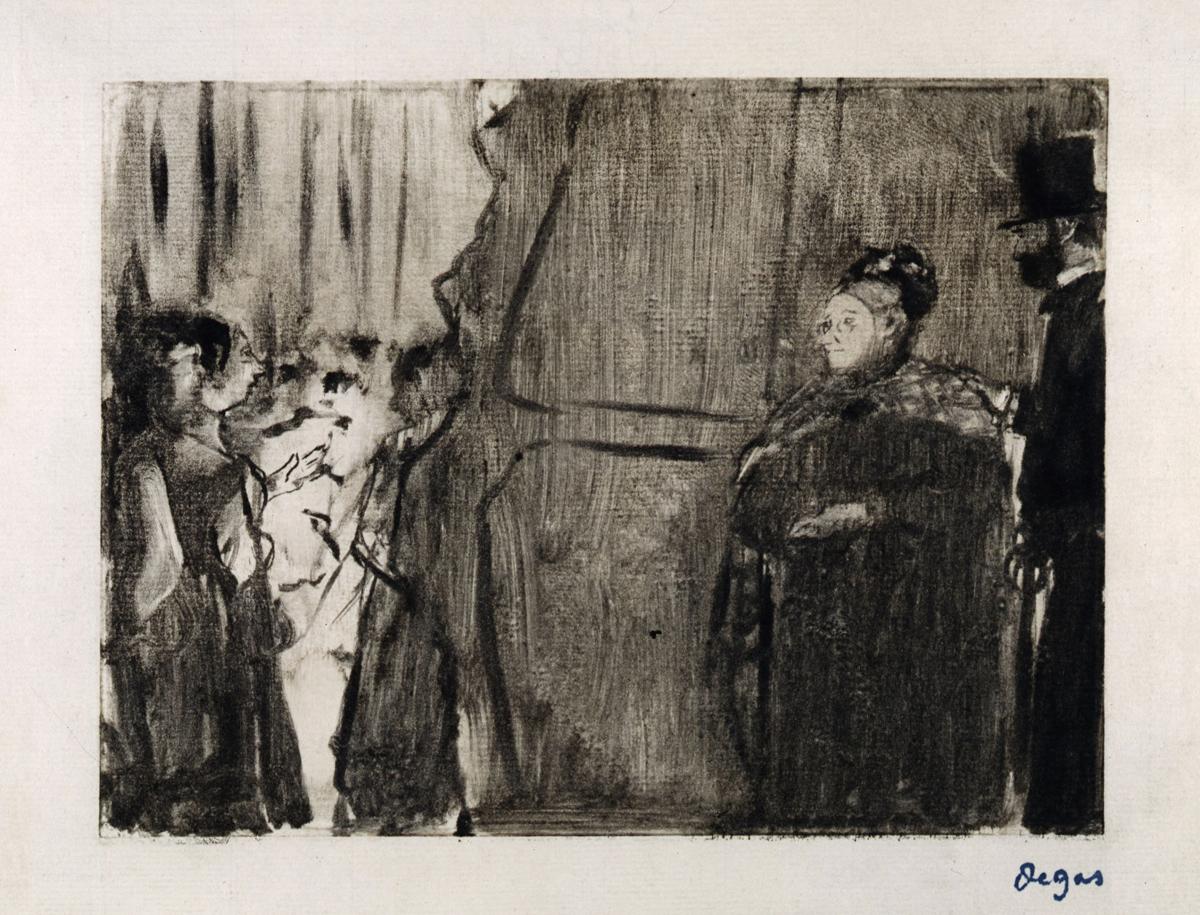 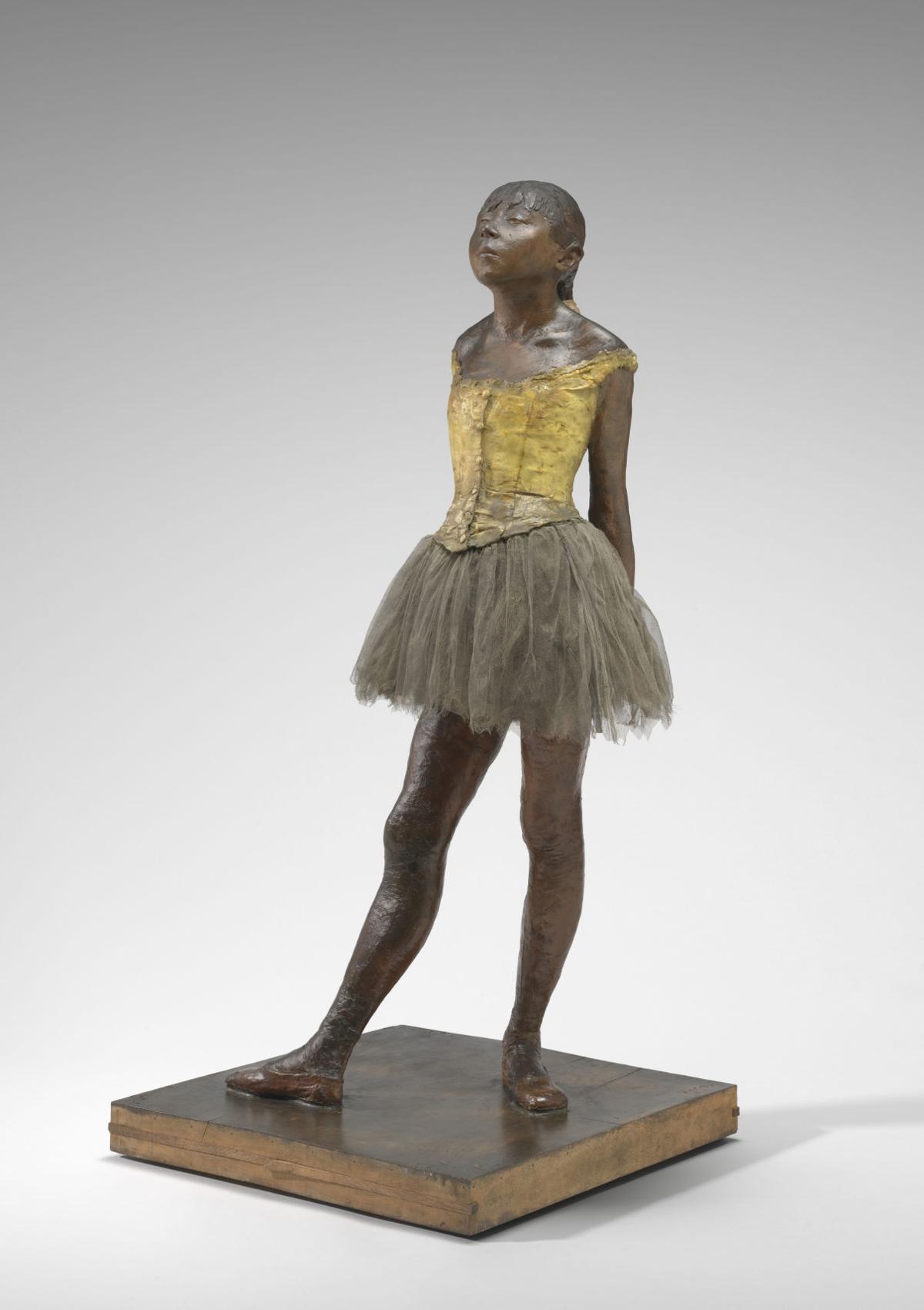 Some of the most popular images of 19th-century art come to life in “Degas at the Opéra,” now open at National Gallery of Art through Oct. 12. The museum reopened the Ground Floor of the West Building last month, with reduced hours, limited capacity and timed passes required for entry. The exhibit went on display March 1, just a few weeks before the coronavirus lockdown.

There are probably 1,500 works in various media by Degas on this subject, of which the D.C. exhibit has selected and arranged 100, offering much to say about the art of the ballet and about Edgar Degas’ study of the body in movement. The enduring appeal of his work, however, is not in any sentimental blending of visual and performing arts, but rather what Degas reveals of their connecting truth.

One poet said about Degas’ work that it was “beauty joined to energy.” Degas lived in a parallel world with the ballerinas. As he sketched, he listened to the same music they practiced to. He would also record the unaware moments of these ballet “rats,” as the young dancing students were called. There is both humor and seriousness in his depictions of dancers, sometimes shown adjusting a slipper or scratching their backs with arms crossed behind their heads.

Two film clips of live ballet scenes from “La Source (The Spring)” and “Robert le Diable (Robert the Devil)” set the stage for what is to come in the exhibit, which has been arranged in eight galleries. Degas’ first work of the dance at the Paris Opéra is “Portrait of Eugénie Fiocre a propos of the Ballet ‘La Source’” (1867–1868). This dreamlike image portrays the celebrity ballerina in a scene with a live horse, a real waterfall, rocks and plants. Pink ballet shoes between the horse’s back legs connect the naturalistic scenery to the artificial world of theater. In “The Ballet from ‘Robert Le Diable’” (1871–1872), Degas does not focus on the spectacle onstage but rather on the view from the orchestra, where a man who has probably seen the opera many times has his opera glasses turned to see who is in the audience.

Degas was not a musician, but he came from a musical family. “Lorenzo Pagans and Auguste De Gas” (c. 1871–1872) features Pagans, known as the “Spanish singer” due to his fondness for the music of his homeland, in a salon hosted by Degas’ father, who is sitting by a piano. The musical score behind his head is positioned like a halo.

As a season ticket-holder in the 1880s and 1890s, Degas would have likely been at the opera three times a week and heard many operas, some as many as 60 or 70 times. He would leave no space, public or private, unexplored: from the lobby and the auditorium with its gilded theater boxes, to the stage and then behind the curtain to the backstage, classrooms and rehearsal rooms.

His portraits include his friend, the librettist Ludovic Halévy, as well as a number of musicians from the Paris Opéra orchestra. Désiré Dihau, a bassoonist who was also a regular guest at Degas’ father’s musical gatherings, is placed in the front row of “The Orchestra of the Opéra” (1870). Behind the scenes: “The Dance Class” (begun in 1873, completed 1875–1876) features ballet master Jules Perrot, a celebrated dancer and choreographer during the 1830s–1850s during which the Paris ballet was at its peak.

What Degas is best remembered for however, are the many unnamed ballerinas he sketched. Besides the fleeting moments of “Dancer with a Bouquet Curtseying on Stage” (1878), there is the foreboding of “The Curtain” (c. 1880), a pastel over charcoal and monotype. Here, powerful wealthy men are posed backstage to prey on the young ballerinas, whose poverty has made them exploitable.

While these are his most familiar works, Degas continued to experiment with new forms and methods. Inspired by popular Japanese-themed works at the time and recalling the decorative panels hung over doorways in elegant homes of the French aristocracy, he created fans and elongated paintings.

“Young Spartan Girls Challenging Boys,” also known as “Young Spartans Exercising,” (c. 1860–1862, reworked prior to 1880) is the centerpiece of the gallery “Bodies in Motion,” featuring sketches of various poses.

Degas’ most famous sculpture is “Little Dancer Aged Fourteen” (1878–1881). She was Marie van Goethem was born in 1865. While some things are known about her life, nothing more is known after she was dismissed from the Opéra in 1882 for poor attendance. A clip of “La Petite Danseuse de Degas (Degas’s Little Dancer) Ballet” in two parts is included in a gallery devoted to her alone.

This complex work of pigmented beeswax, clay, metal armature, rope, paintbrushes, human hair, silk and linen ribbon, cotton faille bodice, cotton and silk tutu, linen slippers on wooden base was highly criticized at its first appearance at a show in Paris. Degas would never show another sculptured piece in his lifetime, while the “Little Dancer” would be reproduced countless times in popular formats.

Some have said Degas’ theater works are like landscapes indoors. Perhaps one of these largest and last works, “Four Dancers” (1899), which clusters ballerinas near a backdrop of haystacks, is his nod to Claude Monet and his paintings of grain stacks. But perhaps by using a unique set of three photographic plates to create this work in charcoal and pastels, Degas is depicting not the dancers themselves but rather their single motion of moving and twisting as they prepare for a progression of intricate movements, much as he did in his art.

While the NGA provides an audio guide, visitors can also download music that Degas and the dancers heard to accompany their viewing. Suggestions of music at the Paris Ballet at the time include Leo Delibes' "Sylvia" or his “Coppelia.” Degas’ friends included French composers Charles Gounod, Camille Saint–Saens and Georges Bizet, whose operas included ballet scenes.

Bassoonist Désiré Dihau is featured in ‘The Orchestra of the Opéra,’ oil on canvas.

‘The Dance Lesson’ is among 100 works in the exhibit ‘Degas at the Opéra,’ celebrating the 350th anniversary of the Paris Opéra’s founding, at the National Gallery of Art.

‘Madame Camus’ is part of the Chester Dale Collection.

The exhibit, on display through Oct. 12, showcases the artist’s love of the Paris Opéra. Above: ‘Four Dancers.’

Ballet master Jules Perrot is depicted behind the scenes in the painting ‘The Dance Class.’