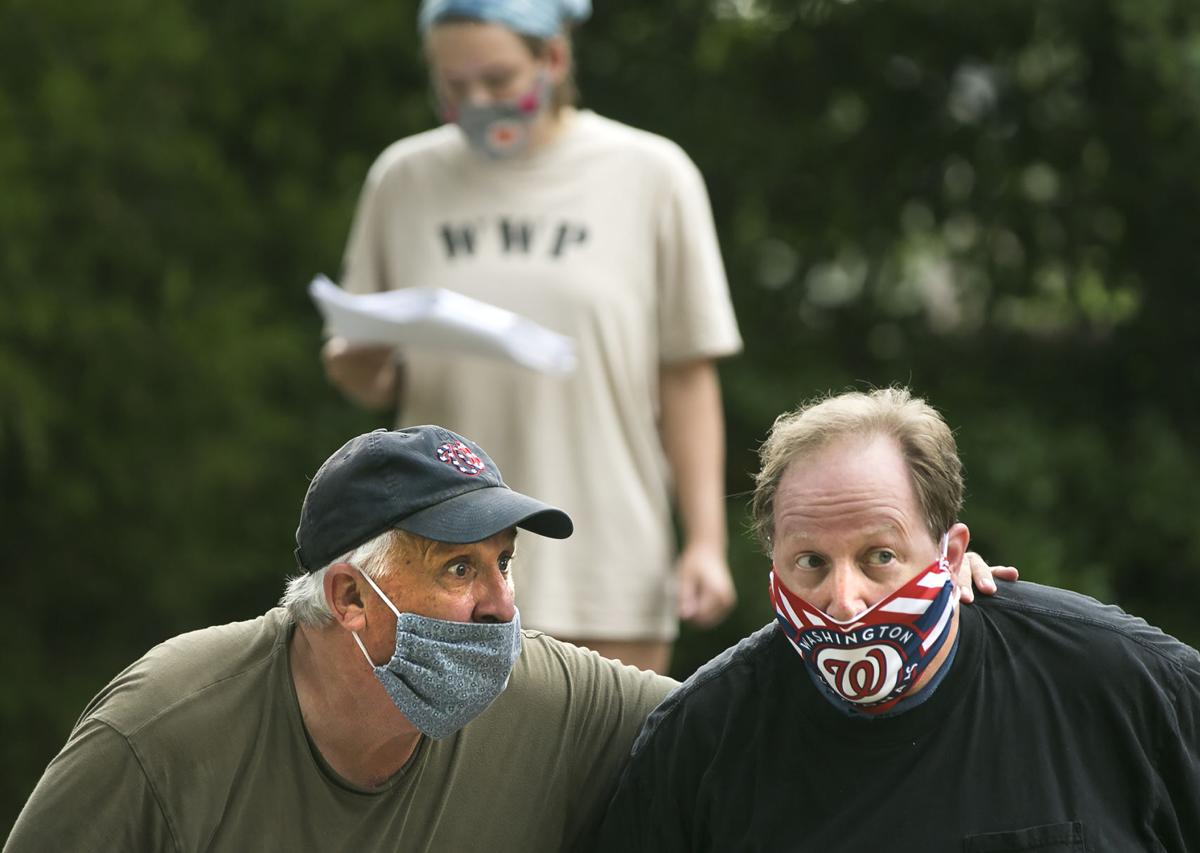 David Schubert (left) as Caliban and Steven Thompson as Stefano rehearse for ‘The Tempest,’ which opens Saturday at Kenmore. 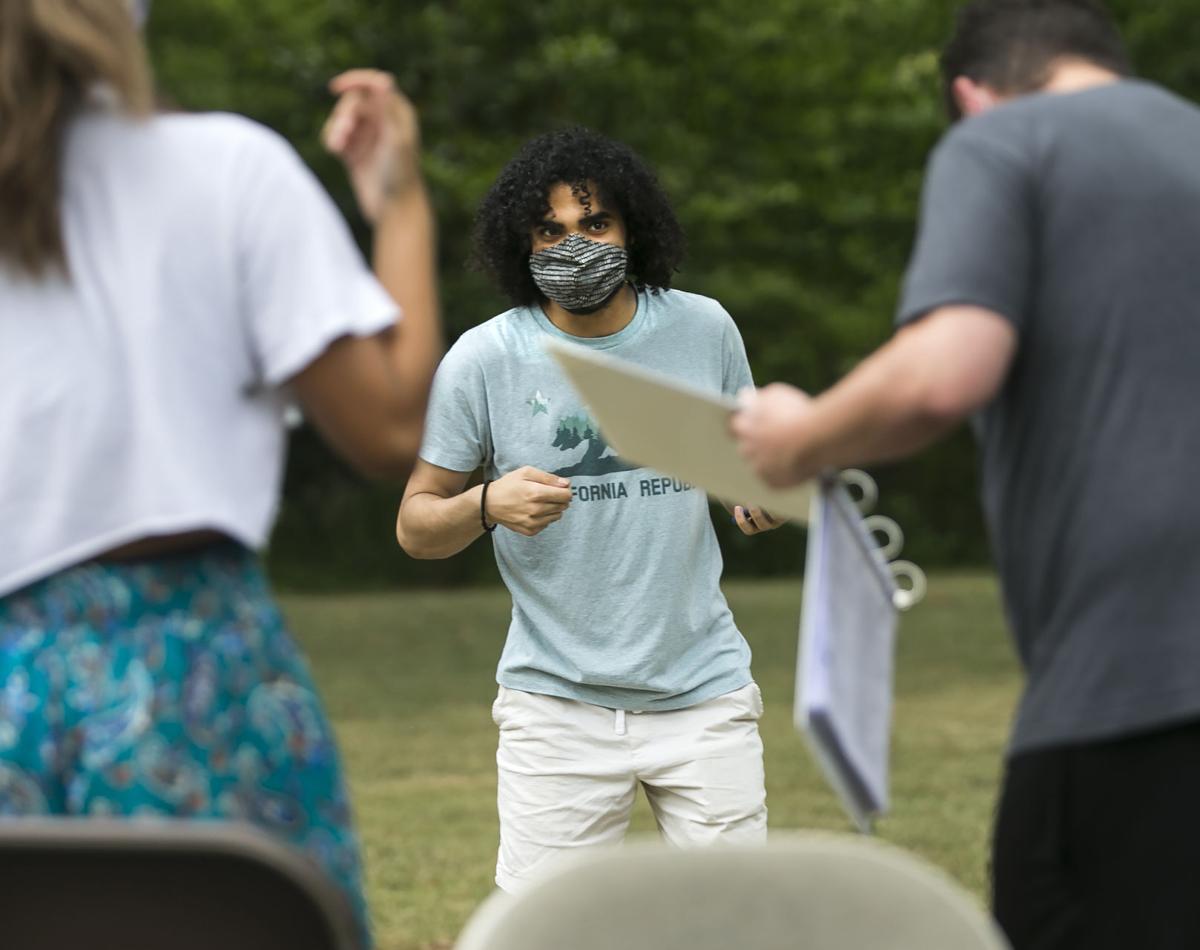 Director Wilson Pezzuto watches Colleen Kleveno (Miranda) and Jeffrey Kyer II (Prospero) perform a scene from ‘The Tempest,’ about an exiled duke on a mysterious island. 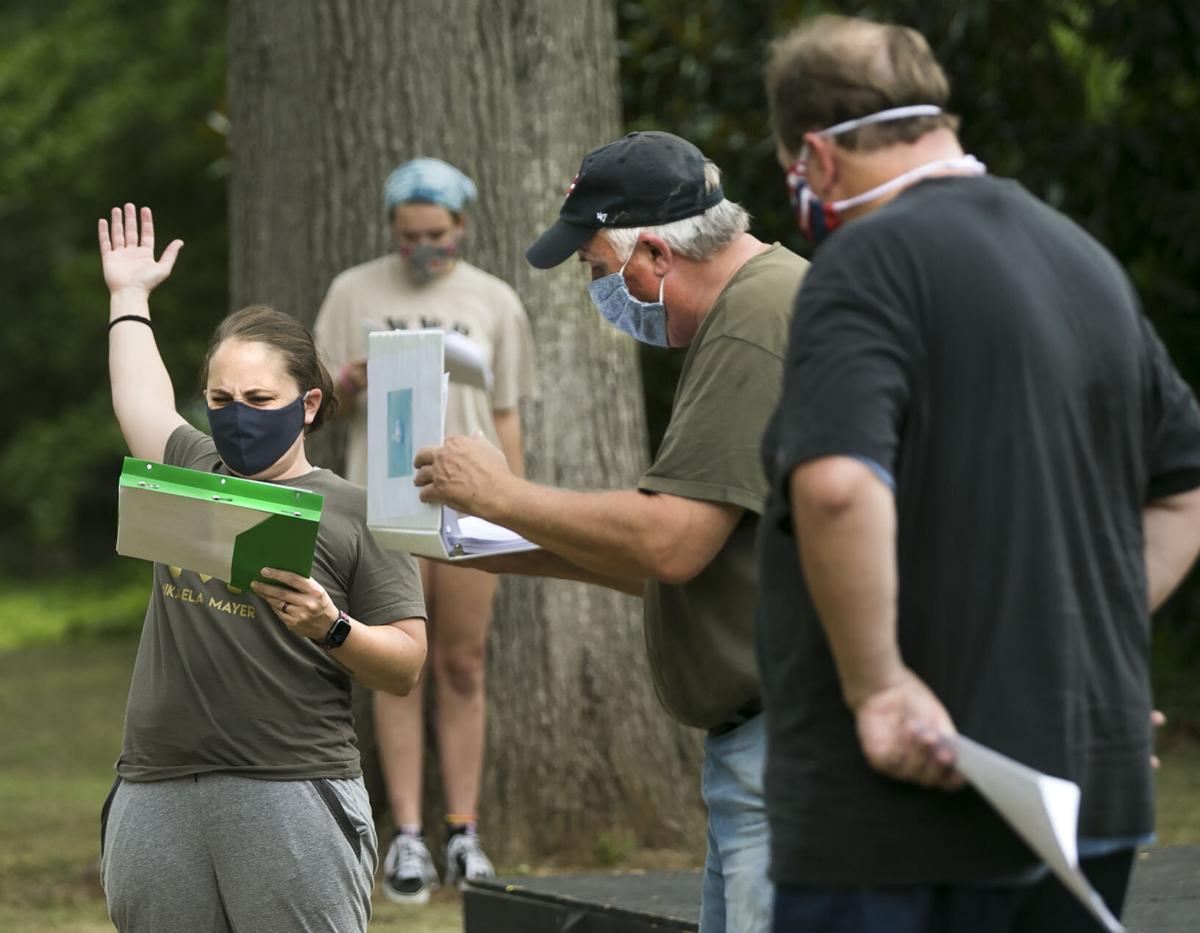 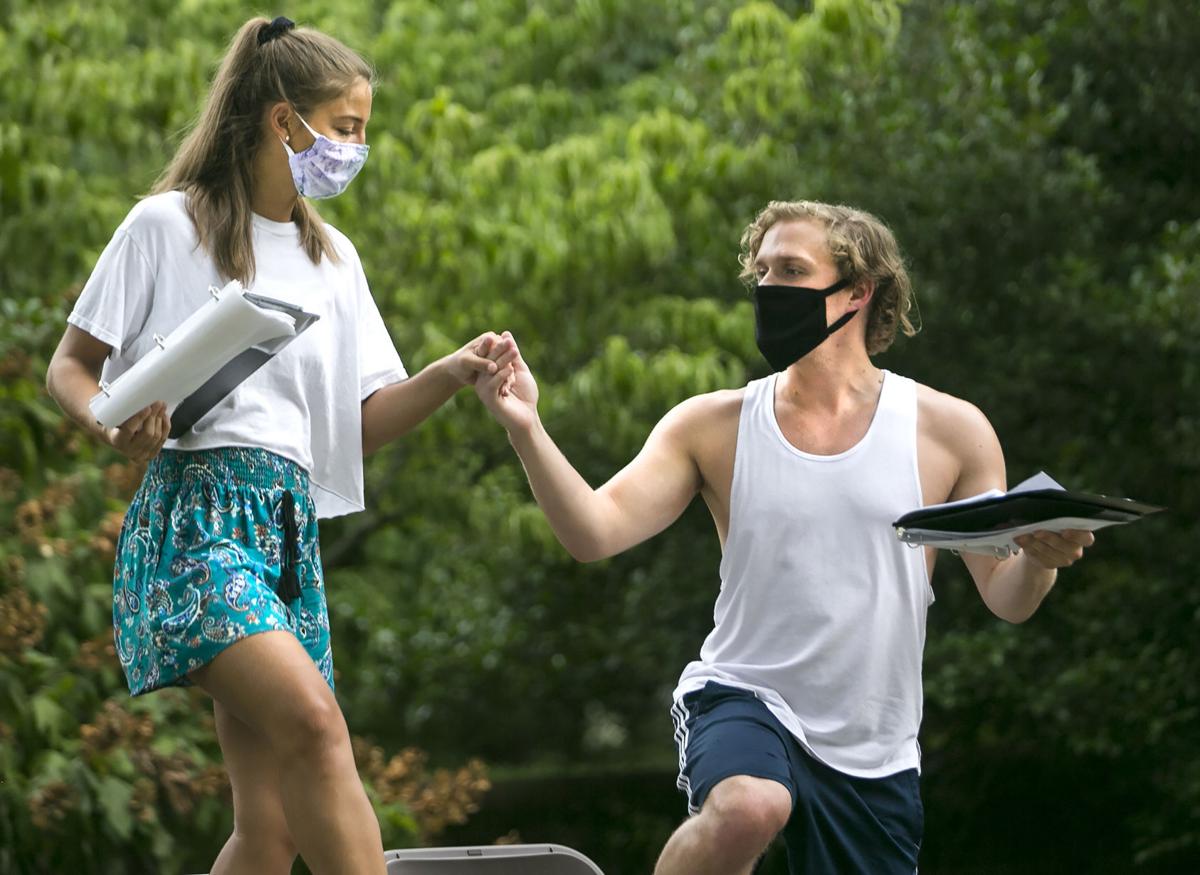 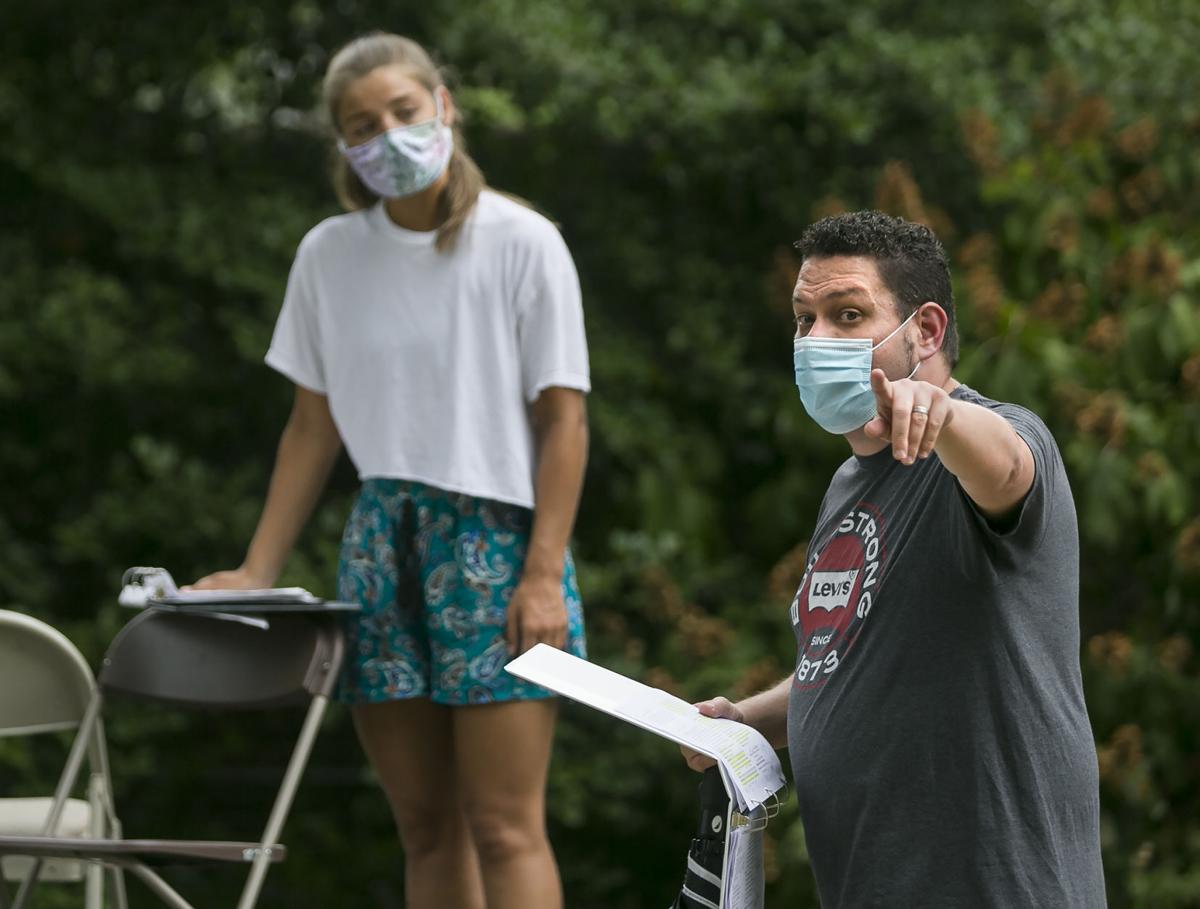 Colleen Klevelo and Jeffrey Kyer, II rehearse a scene from William Shakespeare’s “The Tempest” rehearse at Historic Kenmore on Friday, July 17, 2020. The production will be performed during Shakespeare on the Lawn at Kenmore. 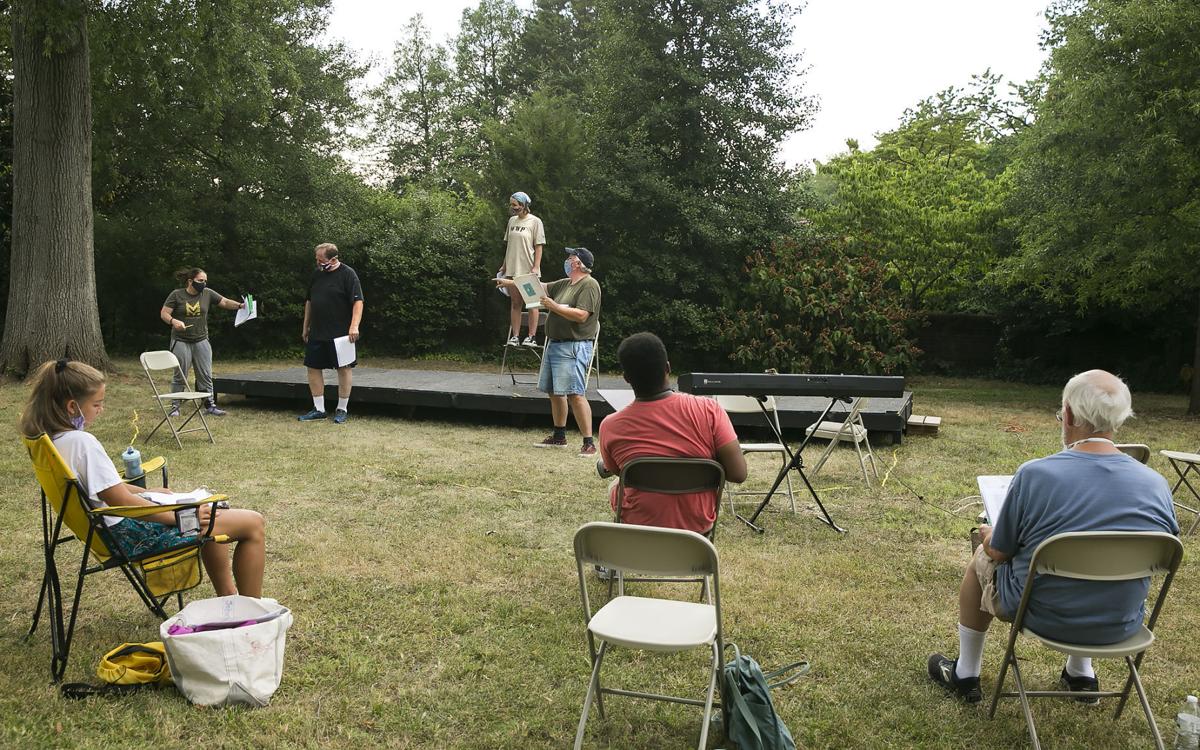 Cast members of William Shakespeare’s “The Tempest” rehearse at Historic Kenmore on Friday, July 17, 2020. The production will be performed during Shakespeare on the Lawn at Kenmore.

By MARK WALKER FOR THE FREE LANCE–STAR

Shakespeare on the Lawn at Kenmore might be the only local venue people can see a play live this summer, and “The Tempest” might be the kind play that serves a distraction from the times.

“It’s a very fun play,” said Kenmore spokeswoman Jessica Burger. “I think it’ll make for a very enjoyable evening out here at Kenmore. We’re really looking forward to being able to have it despite all the complications we’re facing with COVID. I think people are really going to be excited to get to be able to see a performance during all of this pandemic.”

Kenmore, which was completed in 1775 by Fielding Lewis, a local Fredericksburg merchant who was married to George Washington’s younger sister Betty, boasts a lawn that is big enough to seat upward of 200 people, Burger said.

This year, in light of the pandemic, seating will be limited to 150 people for four performances at 6 p.m. Saturday and Sunday and Aug. 1 and 2, Burger said.

Limiting the audience will allow Kenmore to keep groups six feet apart. Masks are encouraged and the actors will be set back far enough from the audience to be safe, Burger said.

“We’re really lucky that we have a venue where we can do something outside to make it safe for everybody,” Burger said.

Shakespeare on the Lawn—a tradition at Kenmore—is in its 17th year and Burger said it’s become a summer staple in Fredericksburg.

“It’s become a very popular local event and something people in the area look forward to. Getting to sit on the lawn at Kenmore at night is a pretty magical place,” Burger said. “To watch theater outside is kind of a nod to how it used to be done here back in the 18th century.”

Wilson Pezzuto, the director with the Fredericksburg Theatrical Society, agreed that there’s something about Shakespeare that lends itself to being performed outside.

“I think it’s because it’s the way it was originally performed. It’s really how they would do their big events back then. They would just set up a place in the middle of one of these big plantation lawns or out in a field somewhere. People would gather on all sides and watch it.”

“The Tempest,” set on an island somewhere near Italy, is a play about Prospero, the one-time duke of Milan, and his daughter, Miranda, who live with a sprite named Ariel and a strange wild man called Caliban. Themes of magic, love, betrayal and forgiveness run through the play.

“I guess in this current environment, it’s kind of an interesting message that we do have to adapt and change. That’s part of life and part of us growing. It’s a good message,” said Pezzuto, a business major at George Mason University.

“The Tempest” is thought to be one of the last plays Shakespeare wrote alone and people like it, he said. “It’s a very comical play, so it’s going to be a good time for a lot of people. I think for people who end up seeing it, it usually ends up being one of their favorites.”

Colleen Kleveno, who plays Miranda, said her favorite part of the play is the production’s original music.

“I’ve done Shakespeare before straight, as it is, but it’s really fun to hear this contemporary music playing with it and it’s a lot of fun to work with. I’m a musical theater student, so it’s a lot fun to bring that into Shakespeare,” said the George Mason University student.

“The main point of the story is this redemption arc. Prospero starts very dark, very jaded, very bitter, but by the end, he learns forgiveness. I think that’s a good message and a very good theme,” she said.

Burger said a lot of people come to Kenmore early to enjoy picnics before the live performance. While people will be allowed to walk in if space is available, Burger recommends people make reservations. If the play is rained out, refunds will be given.

Pezzuto also emphasized that safety at the performance will be paramount.

“I guess I just want everyone to know that we are being super safe in how we are handling everything,” he said. “We have all sorts of guidelines in place for the audience and our actors to make sure it’s a safe event.”

Shakespeare on the Lawn at Kenmore: “The Tempest,” 1201 Washington Ave., Frederickburg. 6 p.m. Saturdays and Sundays, July 25-26 and Aug. 1-2. $15 adults, $7.50 students; ages 3 and under are free. Masks are encouraged; space will be limited and social distancing will be followed. Reservations are required. In the event of rain, the performances will be canceled and refunds will be issued. To make a reservation, call 540/373-3381, ext. 1017; email events@gwffoundation.org or visit kenmore.org.

David Schubert (left) as Caliban and Steven Thompson as Stefano rehearse for ‘The Tempest,’ which opens Saturday at Kenmore.

Director Wilson Pezzuto watches Colleen Kleveno (Miranda) and Jeffrey Kyer II (Prospero) perform a scene from ‘The Tempest,’ about an exiled duke on a mysterious island.

Colleen Klevelo and Jeffrey Kyer, II rehearse a scene from William Shakespeare’s “The Tempest” rehearse at Historic Kenmore on Friday, July 17, 2020. The production will be performed during Shakespeare on the Lawn at Kenmore.

Cast members of William Shakespeare’s “The Tempest” rehearse at Historic Kenmore on Friday, July 17, 2020. The production will be performed during Shakespeare on the Lawn at Kenmore.